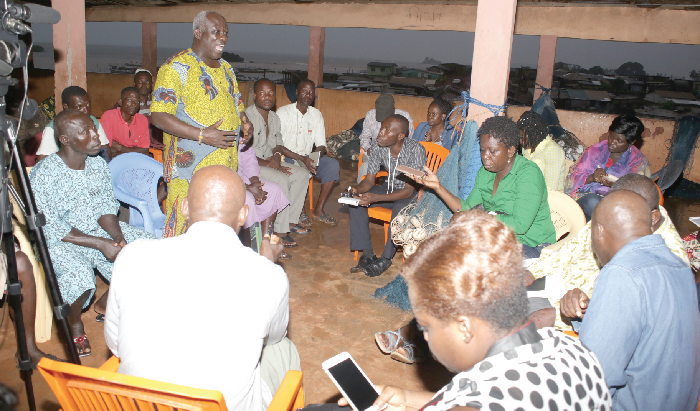 Leaders of fishing communities in Axim, a coastal town in the Western Region, have called for an end to what they call the politicisation of the fisheries sector, as that was collapsing the industry.

They blamed the current woes in the fishing industry which had resulted in dwindling fish catches on politicians. They claimed interference in the affairs of the industry by politicians was posing a challenge to the implementation of laws and regulations in the industry.

According to them, some ministers of state at times threatened to have police officers enforcing the law dismissed, while some district, municipal and metropolitan chief executives also caused the release of persons who had been arrested for flouting the law.

These came out during a tour of eight fishing communities by a group of journalists. The communities visited included Shama, Sekondi and Axim in the Western Region; Elmina and Biriwa in the Central Region and Bortianor in the Greater Accra Region.

The interaction with the fisherfolk was part of a study tour organised by the Fisheries and Coastal Management Capacity Building Support Project of the University of Cape Coast and sponsored by the United States Agency for International Development (USAID).

The Chief Fisherman of Axim, Nana Kofi Bentsil, said there were laws on fisheries but they were not being implemented because of political interferences.

Specifically, he said a lot of fishermen were engaging in illegal fishing but the laws were not being enforced.

Bad practices such as pair trawling, light fishing, use of under-size mesh nets, monofilament or rubber nets in marine fishing, dynamite and harmful chemicals in fishing were outlawed.

The Fisheries Regulation, LI 1968 and the Fisheries Act 2002 (Act 625) prescribe measures for conservation, management and development of fisheries and aquaculture.

Yet, the fisheries industry is currently beset with numerous challenges such as environmental degradation, overfishing, pollution, among others.

Nana Bentsil said he being the chief fisherman, he was supposed to be the chairman of the seven-member committee at each landing site, "but once there is a change of government, the incumbent chairman is categorised as being aligned to the old political administration, therefore, political activists take over the premix committee".

The journalists were also told that distribution of free fishing gear such as outboard motors was usually done based on political party affiliation.

"The fishing industry must be depoliticised because the sea is not for any political party. We are fishermen and we make our livelihood from the sea," he added.

Nana Bentsil urged the Ministry of Fisheries and Aquaculture Development and the Fisheries Commission to engage the fishing communities in the formulation of policies and the development of measures to develop the industry.

"They always decide and push the decision down our throat. We are the people on the ground and we know our challenges and have proposals on how they can be resolved; but when we make suggestions they are not taken," the chief fisherman complained.

Nana Bentsil said although the government had banned the use of monofilament nets, they were still in use.

Monofilament nets are very light and invisible when in water and are stationary in the water column to entrap fish.

These nets also pose a serious threat to other creatures in the marine and freshwater environments such as platypus, tortoise, turtles, water rats and water birds.

Nana Bentsil said for children from the coastal areas to get access to quality education, the government must institute a scholarship programme for them.

Although he conceded that the Ghana National Petroleum Corporation (GNPC) had instituted a scholarship scheme in collaboration with Hess Ghana Exploration Limited, he said, “But it is for only brilliant students who obtain single grades in the BECE.

"Not all our children are as brilliant as children in the urban areas. The children here attend public schools and we the parents are either not educated enough or do not even have the time to help our children with their assignments and educational needs."

He also asked for the development of alternative livelihood projects for the fishing communities which the fisherfolk could engage in during the lean or closed seasons.

"Canoes and fishing vessels here employ between five and 20 people but now most of them are out of work as a result of the decreased fish stock. They waste fuel and go fishing for days only to return with nothing.