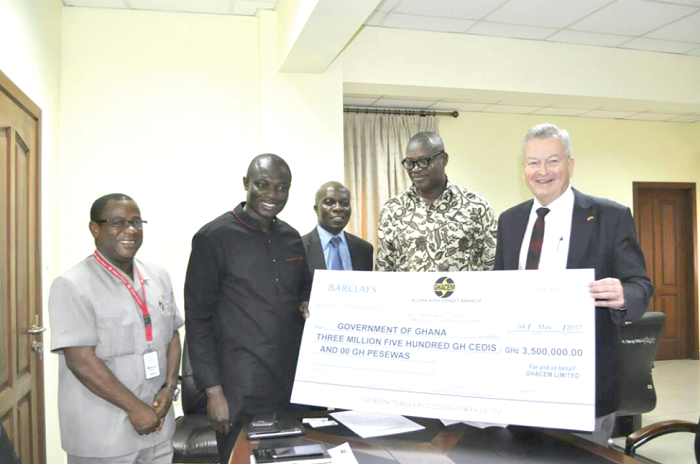 Ghacem Limited has presented a cheque for GH¢3.5 million to the government as final dividend for last year.

The company had earlier paid GH¢4.5 million to the government as interim dividend and the latest payment therfore brings to GH¢8 million the total dividend due the government for last year for its 400,000 shares held in the company.

The Managing Director (MD) of Ghacem, Mr Morten Gade, accompanied by the Strategy and Corporate Affairs Director, Rev. Dr. George Dawson-Ahmoah, presented the cheque at a short ceremony at the Finance Ministry.

Mr Gade reiterated that the goal of the company was to be more efficient in operation to contribute to the state disclosing that the company paid GH¢250 million in taxes and duties to the government last year, an attestation of the company’s loyalty to the country.

He commended the government for targeting the private and the manufacturing sectors as the engine of growth, stating that aside from its financial obligations in taxes and duties also employed over 850 Ghanaians in addition to the large pool of  retailers, which he said had multiple effects on the economy.

A Deputy Minister of Finance, Mr Kwaku Kwarteng, who received the cheque on behalf of the government, admitted that the payment of dividends helped the government in infrastructural development as it added to the revenue generation, hence the need to support businesses to thrive.

That, according to the deputy finance minister, was key for job creation and revenue generation through taxes.

He commended Ghacem for its loyalty to shareholders and assured it of the government’s support to ensure its growth.

For his part, Rev. Dr Dawson-Ahmoah appealed to the government to, as a matter of urgency, inaugurate the Ghana International Trade Commission (GITC), expressing optimism that its implementation would check unfair trade practices in the local manufacturing industry.

He said while the free on board (FOB) value of imported clinker on the international market was $34 per tonne, the valuation by Customs Division of the Ghana Revenue Authority (GRA) was $44 per tonne, a difference of $10.

That, he said, had increased the company’s cost of production disclosing that the company.