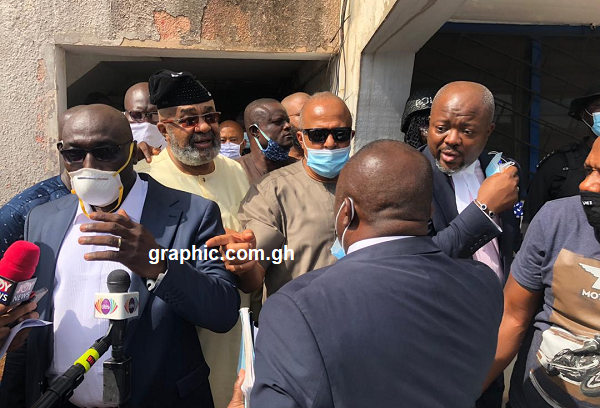 The criminal case against the National Vice Chairman of the opposition National Democratic Congress (NDC), Alhaji Said Sinare has been withdrawn by the police.

At the Kaneshie District Thursday afternoon [October 29, 2020], the prosecutor, Seargent Thomas Safo, told the court that the prosecution wanted to withdraw the case upon “further development in the matter.”

The court, presided over by Ms Ama Adomako Kwakye, acceded to the request and discharged the NDC Vice Chairman.

Alhaji Sinare and one Tahiru Ahmed were charged with conspiracy to commit crime and possession of firearms without lawful authority.

It is not clear whether or not the police have completely closed the case against Alhaji Sinare, and if he might be invited again for new charges to be preferred against him.

His lawyer, Mr Abraham Amaliba, told journalists after the proceedings that the action by the police meant that his client was now “free”.

“The charges that were brought to court were not well founded and that was why the prosecution withdrew it. I can tell you that Alhaji Sinare is now a free man,” he said.

Many supporters of the NDC descended on the court premises to support their National Vice Chairman.

They chanted party songs and called for his release.

Alhaji Said Sinare on Thursday morning reported to the Accra Regional Police Command following an invitation over a weapons distribution allegation against him.

He therefore reported to the Accra Regional Police Command Thursday morning for interrogation.

Speaking to journalists on behalf of Alhaji Sinare whilst he was still at the police station Thursday morning, Mr Abraham Amaliba said, "he was shown two guns, one AK-47 and the other, a pump action gun."

The constituency chairman of the NDC is said to have presented an AK-47 and a pump action gun to the police as evidence of the arms being distributed by the NDC Vice-Chairman to the youth to foment trouble.