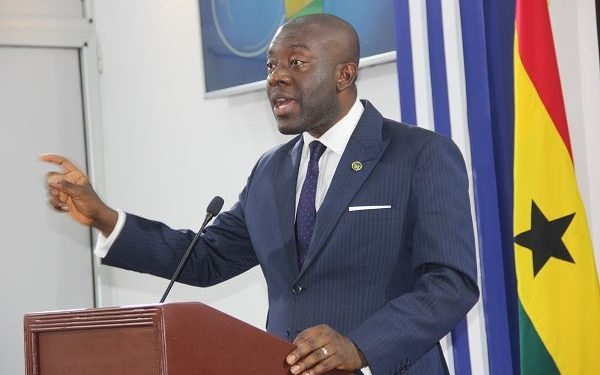 The President, Nana Addo Dankwa Akufo-Addo, does not approve salaries and benefits for the Executive and, by extension, for the First Lady and wife of the Vice-President, the Minister of Information, Mr Kojo Oppong Nkrumah, has said.

He has, therefore, described as misleading, information making the rounds that President Akufo-Addo had given approval for Mrs Rebecca Akufo-Addo and Mrs Samira Bawumia to receive same salaries as Cabinet ministers.

While confirming that there had been an increment in allowances for the spouses of the President and the Vice-President, Mr Oppong Nkrumah emphasised that that was an approval given by the Seventh Parliament.

“The President does approve salaries and benefits for the Executive. Under Article 71, the First Lady and Second Lady are not office holders so no one can determine their benefits under that article.

“However, a committee only recommended that an arrangement for the spouses be made formal and that received approval from Parliament,” he indicated.

Mr Oppong Nkrumah explained that an arrangement that was introduced by former President John Agyekum Kufuor during the start of his Presidency in 2000 had seen spouses of Presidents and Vice Presidents, since then, enjoy allowances, though there was no formal documentation to support that.

The allowances given the two ladies of the executive were considered as part of the privileges of the President and Vice President.

“President Kufuor, in his wisdom, instituted this because of the bad situations of some spouses of some former Heads of States then. Presidents Mills and Mahama even increased the rates of these benefits during their time.

“The truth of the matter is that all surviving spouses of Heads of State, current and former, have always received salaries. Lordina Mahama, Naadu Mills, Matilda Amissah-Arthur, Nana Konadu Agyeman Rawlings, Faustina Acheampong, Fulera Liman etc have all been receiving salaries since President Kufuor's time.

“What has happened now is that the arrangement has been made formal but that was done legally based on the recommendation by the Emoluments Committee,” the Information Minister emphasised.

Mr Oppong Nkrumah further said the Emoluments Committee, set up in 2019 and chaired by Professor Yaa Ntiamoa-Baidu, as part of its recommendations, proposed that the allowances given to the spouses of the President and Vice President be formally included in the review of the entitlements for the executive.

“That recommendation was then forwarded to the Seventh Parliament which then gave the approval and it is now to be implemented. It is, therefore, not true as it is being circulated that the President has approved of emoluments to the First Lady and Second Lady,” he stressed.

The five-member committee was set up in June 2019 by President Akufo-Addo to make recommendations to him and to Parliament on the salaries and allowances payable, and the facilities and privileges available to article 71 office holders.

They were charged to make recommendations in respect of emoluments and other privileges for article 71 office holders, as specified under the Constitution; and also to examine any other relevant matter which the Committee deemed appropriate to its work.

In inaugurating the Ntiamoa-Baidu Committee, President Akufo-Addo, then, urged them to bring to the table the work and include in their deliberations, the work and recommendations of those previous committees to be able to establish consistencies