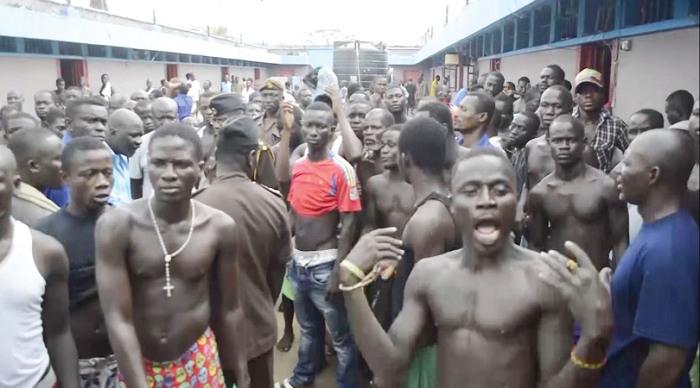 Overcrowding in the country’s prisons has become a major challenge impeding the promotion of rights and dignity of inmates.

The development has made it difficult for the Ghana Prisons Service to classify inmates to prevent criminal contamination.

The Director-General of the Ghana Prisons Service, Mr Patrick Darko Missah, who made this known, said as of June 24, 2021, the prison population stood at 13,200, above its capacity of 9,945, leading to an overcrowding rate of 32.65 per cent.

In a speech read on his behalf by Assistant Superintendent of Prisons (ASP) Mr Stephen Okine Aboagye at the premiering of a documentary about a woman who was convicted and incarcerated wrongly, the director-general said the remand population stood at 1,526, representing 11.56 per cent.

The documentary was about a 69-year-old woman who was sentenced to 11 years’ imprisonment but was acquitted and discharged five years into her jail term following an intervention by POS Foundation, a human rights civil society organisation, to appeal the sentence.

Mr Antwi-Boahen also pledged to fund the education of her 17-year-old son who is in his first year in junior high school.

The director-general commended the POS Foundation for the intervention, adding that the In-Prison Paralegal programmes being implemented by the foundation were other interventions that would ensure access to justice and reduce congestion.

He noted that under the programme, 25 inmates had been trained as paralegals while 18 appeal schools had been created.

“We are grateful to the POS Foundation, the Judicial Service and the US Government for this intervention and it is our hope that civil society organisations, NGOs, particularly POS Foundation would be encouraged and resourced to carry on the good work,” he said.

He expressed the hope that the In-Prison Paralegal programme would be extended to other prisons.

In a speech read on his behalf by a Justice of the Supreme Court, Justice Gabriel Pwamang, the Chief Justice, Justice Kwasi Anin Yeboah, said the intervention by POS came in handy to assist the criminal justice system to correct itself.

He added that as a human institution, trial courts at times made mistakes, which due to varied factors resulted in innocent persons ending up in prison.

The Chief Justice said the country’s legal regime had provisions for such unfortunate slips to be corrected by the appeal and judicial review processes, but such corrective procedures required more money.

“The cost of service of a good lawyer which could have curtailed the mishap in the first instance or offer remedy after conviction does not come within the income levels of the majority of people who are prosecuted for something they have not done,” he said.

For his part, the Executive Director of POS Foundation, Mr Jonathan Osei Owusu, commended the various government institutions in the country’s criminal justice system for supporting the foundation.

He noted that inmates who did not have the financial ability to defend themselves would be trained by the foundation through its In-Prison Paralegal initiative.

The poor conditions in the country’s prisons have been a topical issue within the criminal justice system and among human rights groups.
Currently prisoners are fed on GH¢1.80 a day.

Commenting on the development in an interview with the Daily Graphic yesterday, the Executive Director of the Crime Check Foundation, an implementing partner of the Justice Sector Support Activity Project (JSSP) of the United States Agency for International Development (USAID), Mr Ibrahim Oppong Kwarteng, said majority of the prisons in the country were relics of British colonial rule and that a few prisons had been built by successive governments after colonial rule.

“Most of these facilities have been converted into prisons and because of improper classification of criminals, most often you have petty offenders being mixed with hardened criminals which should not be the case,” he said.

The situation, he said, made most of the prisons environment pathetic for inmates and undermined the fundamental correctional function that they exist to serve.

Additionally, Mr Kwarteng, who is also a prison journalist, said as a result of the nature of the prisons, contraband were most often smuggled into the prisons.
“Our prisons have no scanners so it makes it easy for visitors to smuggle contrabands in under the guise of bringing food to their relatives,” he said.

As an intervention, Mr Kwarteng said the Crime Check Foundation had paid various court fines to release some 1,200 offenders who could not afford the fine and thus found themselves in detention.

He said most often when the convicts served their full term, their families rejected them and they went back to commit crimes.

He said under the Ex-convict Re-integration initiative being undertaken by the Foundation, most of the ex-convicts had been supported to start their own small businesses to become entrepreneurs.

“These are poor people who have had a brush with the law and can even do community service for reformation,” he said.

Mr Kwarteng said the increase in prison population indicated that there were possibly more crimes, hence the need to build more prison facilities to create space and to make inmate classification possible.

However, he said despite the expansion, one of the best ways of reducing the congestion in prisons was to increase the number of amnesty granted to inmates while expediting action to pass the Community Service Bill and come up with a comprehensive law on non-custodial sentencing.

Mr Kwarteng said the bill, when passed, would help petty offenders to serve as labourers to clean gutters, champion the Green Ghana agenda and the Planting for Food and Jobs.