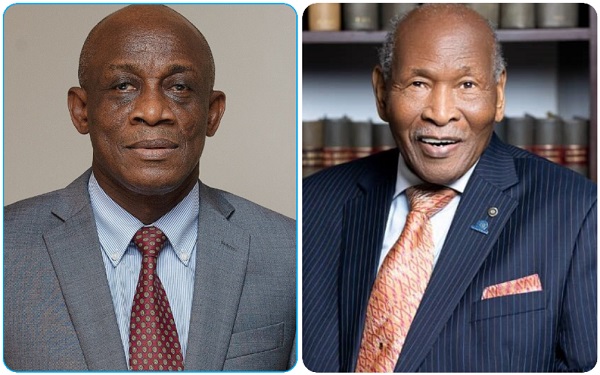 Seth Terkper — A former Minister of Finance (Left) and Sam Okudzeto — A veteran legal practitioner and member of the Council of State
30.5k Shares

Two statesmen have called on citizens to eschew extreme partisan politics and support the government to turn the economy around.

While a veteran legal practitioner and member of the Council of State, Sam Okudzeto, urged citizens to remain hopeful and do their bit to support the government to help turn the economy around for the better this year, a former Minister of Finance, Seth Terkper, has called on the citizenry not to allow partisan politics to divide them to the extent of hindering development.

Messrs Okudzeto and Terkper were speaking in separate exclusive interviews with the Daily Graphic.

In a chat with the Daily Graphic’s Samuel Duodu in Accra, the Council of State member shared his " message of hope to the people," stressing that by everyone putting their energies to the wheel, the economy will grow with a resultant improvement in the quality of life of the people.

"I am saying this not because somebody in government has promised us, but because we the people have resolved that we will work together to make our nation a shining example on the continent and the rest of the world.

"We must not lose hope as citizens, but work together as one people with a common destiny who are determined to turn things around," he said.

The legal luminary acknowledged that the year 2022 was a difficult one but urged citizens not to lose hope as "we have all that it takes to build the prosperous nation we all desire".

He admonished the mosques, churches and traditional authorities to continue to drum home the message of hope and the need to remain united as one people determined to work together for the common good of the country.

Mr Okudzeto called on the media to use their platforms to inspire hope and confidence in the citizenry and desist from painting a gloomy picture that all hope is lost.

"The media is a powerful tool and it must be used in a positive manner to change the mindset of Ghanaians that it takes the contributions of each other as citizens to make our nation prosperous," he said.

"We can make it as a people and as a nation if we remain united. It is only through unity we can achieve success," the elderly statesman added.

"Ghana is a very beautiful country and we should not allow anything to destroy our country. Unity is important. Let us unite together as one people with one destiny for the success of our country," he said.

Mr Okudzeto also urged those in government to think above themselves and put the love of the country and the national interest first.

"When we put the national interest first we will go beyond the ordinary," he stated.

Mr Okudzeto bemoaned the polarisation of the Ghanaian society, advising Ghanaians to see themselves as one people and not on political party lines, if the nation was to progress.

"We must see ourselves as Ghanaians first before and when we do that we can come together to work for the progress of the nation," he stated.

Mr Okudzeto also urged those in government to think above themselves and put the love of the country and the national interest first.

"When we put the national interest first we will go beyond the ordinary.

"I am making a passionate plea to Ghanaians that God has given us a wonderful country and extremely talented people, let us use our talents and work together in unity and rebuild this nation and make it a shining example, not only to the continent but the rest of the world," Mr Okudzeto stated.

The member of the Council of State called on Parliamentarians to shed their political lenses and begin to look at issues from the national perspective.

"If the government is doing something you disagree with, let us make suggestions as to how the issue can be improved and worked upon," he stated.

"So my plea to Ghanaians is that let us not let party politics divide us. I am not saying politics is bad because it is there to offer constructive criticism and alternatives for the growth and development of the country," he observed.

In an exclusive interview with the Daily Graphic’s Ezekiel E. Sottie in Somanya, the former Finance Minister, Mr Terkper, said partisan politics had always been practised in the country, and in the past, that was not divisive to the point of hindering development as was the case currently.

“We need to be circumspect in the way we handle politics in Yilo Krobo and the country at large in order not to impede our development,” Mr Terkper said on the sidelines of the Yilo State Homecoming Summit, held at the University of Environment and Sustainable Development (UESD) at Somanya, capital of the Yilo Krobo municipality in the Eastern Region.

The event was on the theme: “Yilo Krobo beyond partisan politics: Harnessing our development potential.”

Mr Terkper said when it came to riots in politics in Yilo Krobo, it was limited but it impeded development, adding “it is difficult to develop an area if there is no stability”.

“My humble appeal to indigenes from the area, especially we the privileged ones, is that we must come together to play leadership roles so that we can lead our people to develop,” Mr Terkper emphasised.

Mr Terkper cited an example of the royalty from the mining of limestone in the Krobo area for cement production in Tema, which was still in the accounts of the Ministry of Local Government, Decentralisation and Rural Development.

That, he said, was due to the lack of mutual understanding between both Yilo Krobo and Manya Krobo Traditional areas for the sharing of such money for development projects.

He said the time had come for the elite in both traditional areas to play leadership roles to ensure that the issue was resolved for them to have access to the money for development projects which the traditional areas needed badly.

Referring to local partisan politics in Yilo Krobo, he said every government, be it NDC or NPP, in one way or the other built schools and other infrastructure for the common use of the people.

Mr Terkper asked: “Have we asked whether the students in Yilo Krobo Senior High School at Somanya, for instance, are from NDC or NPP parents?” He said such questions were immaterial as what was very important was students attending school irrespective of what party their parents belonged to. He also cited the example of the land on which UESD was built which was the property of the Convention People’s Party (CPP), which was popularly known as Brigade.

He said it was therefore immaterial for anybody to play partisan politics with it, as what was necessary was the fact that the university was built in Kroboland to benefit them, provided the people would have keen interest in tertiary education.

“Majority of things we do do not have reference to NDC or NPP. When it comes to award of contracts, then you see these things emerging, but in ordinary dealings these things do not show up,” he added.

Advice to the youth

The former Finance Minister advised the youth, in particular, who usually foment trouble with partisan politics to be democratic, exercise their democratic rights but not in a rowdy way, which would bring bitterness and hatred among friends and families.