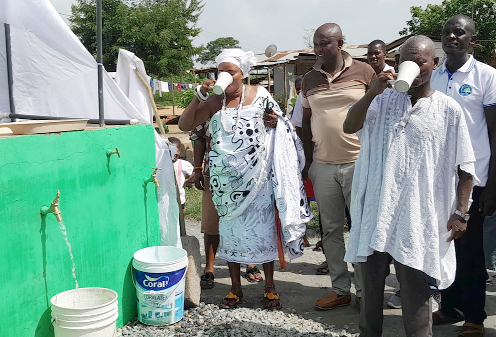 Nana Awo Korkor (left), Mawerehemaa of Awherease, and Nana Kwasi Fante (right), Odikro of Koko Junction, tasting the water after the inauguration. Looking on are community members as well as other dignitaries
30.5k Shares

The situation where the inhabitants of Koko-Junction, a community near Ampedwee in the Suhum Municipality in the Eastern Region were relying on unwholesome water drawn from a shallow well is now a thing of the past.

This is because a United States-based charitable organisation, Mr Cool and Friends Foundation, in partnership with the Mawerehemaa of Awherease, Nana Awo Korkor, has provided the community with a mechanised water system.

The new water facility, which cost GH¢25,000, will address the water situation in the community.

Hitherto, the shallow well also dried up, especially during the dry season, compelling the dwellers to depend on bags of sachet water for domestic use.

Nana Korkor, who inaugurated the new water facility on behalf of the Founder of Mr Cool and Friends Foundation, Charles Amankwaa Dickson last Thursday, said the only source of drinking water in the community was a polluted small shallow well before help came.

She said accessing potable water was a major source of worry to residents of Koko-Junction and its surrounding communities and as such, many women, including children, on a daily basis were forced to trek long distances in search of water.


She stated that the community was grateful to the foundation for providing them with potable water after many years of deprivation.

She urged the community members to take good care of the facility to ensure that generations yet unborn would also enjoy it.

A brother of the Founder of the foundation, Kwabena Sintim Aboagye, said the provision of the new water system was in fulfilment of a promise made by his brother, Cool.

He stated that the vision of Mr Cool and his friends was to provide safe drinking water to deprived residents living in rural communities.

Mr Aboagye said his brother’s passion was to ensure that human beings living in rural communities had access to potable water so as to continue to remain healthy at all times.

He said the provision of the water facility would go a long way to discourage community members from drinking from the polluted shallow well and at the same time, prevent them from contracting water borne diseases.

He appealed to well-placed individuals and other philanthropic organisations to also provide some of the needs of the inhabitants such as school buildings among others, as his brother alone could not provide the entire needs of the community.

The Assemblyman for the Supresu Electoral Area, Jonathan Odonkor, who was highly elated about the new water facility, lauded Mr Cool and friends for providing potable water for the community.

He said the desire of Mr Cool’s charitable foundation was to make potable water available for people in deprived communities such as Koko-Junction.

He commended the foundation for providing them with a new mechanised water system after many years of appeals to the relevant authorities.

The Odikro of Koko-Junction, Nana Kwasi Fante, stated that the community had been without potable water and that the only source of drinking water was the polluted shallow well which dried up during dry season, making life unbearable for women, especially during that period.

Nana Fante urged the community members to take good care of the new water facility to enable the whole community to benefit from it.