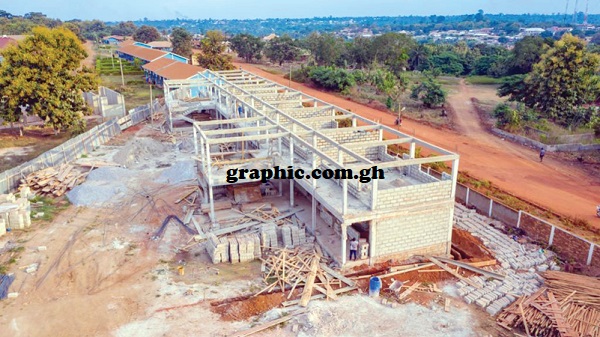 One of the uncompleted structures at the Mim Senior High School
30.5k Shares

In all, 867 claims from contractors who had presented valid certificates of work were settled.

The projects executed by the contractors include the construction of classrooms, dormitories, laboratories, administration blocks, dining halls and hostel blocks.

The GETFund has also honoured payments for the supply of bunk beds, furniture, electrical items, vehicles for some schools, as well as rehabilitation works on some school infrastructure.

The Administrator of the fund, Dr Richard Ampofo Boadu, disclosed this to the Daily Graphic in an interview yesterday.

The interview was a follow-up to a pledge the administrator had made to the contractors at a stakeholder engagement forum in Accra last month.

Dr Boadu had assured the gathering that processes were far advanced to pay claims covering over 867 certified interim payment certificates (IPCs) on projects and supplies across the levels of education sector.

He said 322 of the projects were at the secondary level, 244 at the tertiary, 269 at the basic, while 19 were for the Ministry of Education and its agencies, with 13 of them being contracts for supplies.

The Ashanti Region had the highest number of 161 projects across all levels, followed by the Eastern Region with 146, while the Bono East, Oti, Savannah and Western North regions had one project each, he said.

For the tertiary sector, 242 claims at GH¢188.85 million were paid, while other claims from the Ministry of Education amounted to GH¢3.29 million.

He explained that the payments were made through a mix of funding sources, made up of proceeds from the Daakye Plc Bond issuance and government releases through the Controller and Accountant-General’s Department (CAGD) to the GETFund.

He said the processes for such payments, which began in mid-October 2022 with the signing of novation agreements with contractors covering the 867 claims, ended last month, with the accounts of all beneficiary contractors duly credited.

“It must be noted that the Daakye payments covered mainly emergency projects that were awarded between 2017 and 2022 and certificates received on or before September 30, 2022.

“The tertiary sector claims covered about 92 per cent of certificates on legacy projects inherited by the current administration and received and prepared on or before September 30, 2022, by the GETFund.

“We would like to assure contractors that plans are in place to settle all outstanding certificates in an effort to complete stalled projects in our schools within the next three years,” the administrator said.

Last October, the Ghana Chamber of Construction Industry (GhCCI) demanded that the government should pay arrears of GH¢10 billion owed for various infrastructural projects executed by its members.

It threatened to go to court if the government failed to fulfil its financial obligation to the contractors to retrieve their money.

The Chief Executive Officer of the GhCCI, Emmanuel Cherry, explained that the amount included debt owed to us by the Road Fund, COCOBOD, the Consolidated Fund, as well as the GETFund.”