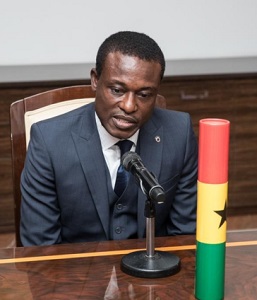 The Office of the Special Prosecutor (OSP) has begun wider investigations into the issuance of customs advance rulings and markdowns of benchmark values by the Customs Division of the Ghana Revenue Authority (GRA).

The investigations cover the period between July 2017 and December 2021.

The OSP’s investigations follow its discovery of potential abuse of the system, which resulted in the refund of more than GH¢1m by Labianca Company Limited to government chest.

The OSP had, in its report on the Labianca controversy, called for a thorough probe of the application of advance ruling and discount of benchmark values.

A statement issued by the OSP said a major finding of the investigations which led to the recovery of GH¢1,074,627.15 was that “the conduct of the investigated officers portends an institutionalised culture of light-hearted unconcern regarding impropriety of action at the Customs Division, which indicates a high propensity to engender corruption and corruption-related activities; and that the officers ignored mandatory provisions of the Customs Act, 2015 (Act 891) and engaged in their own predilections”.

Consequently, it said it had, since August 11, 2022, directed the Commissioner of the Customs Division to submit to it on or before September 30, 2022, the particulars of all applications for customs advance ruling, markdown of benchmark values, private rulings and class rulings pertaining to the application of customs law and the decision on each of the applications within the indicated period.

It said it had also written to the Commissioner-General of the GRA to submit an Integrity Plan designed with the aim of preventing the corruption of the exercise of discretion by officials of the Customs Division, especially in respect of the rendering of rulings, to assure the effective operation of the Customs Act, 2015 (Act 891) and the Revenue Administration Act, 2016 (Act 915), on or before December 31, 2022.

The OSP recovered GH¢1.074 million from Labianca, owned by Eunice Jacqueline Buah Asomah-Hinneh, an elected member of the Council of State representing the Western Region.

The amount represented a shortfall in import duties the frozen foods company paid to the state.

In an investigative report by the OSP, Ms Asomah-Hinneh was accused of influence-peddling by allegedly using her position as a member of the Council of State and member of the Board of Directors of the Ghana Ports and Harbours Authority (GPHA) to get a favourable decision from the Customs Division for her company.

The investigative report, dated August 3, 2022, is titled: “Report of Investigation into Alleged Commission of Corruption and Corruption-Related Offences involving Labianca Group of Companies and the Customs Division of the Ghana Revenue Authority.”

The OSP faulted a Deputy Commissioner of Customs in charge of Operations, Joseph Adu Kyei, for issuing what it described as unlawful customs advance ruling, which reduced the benchmark values of the frozen foods imported by Labianca Limited, thereby reducing the company's tax obligations to the state.

“The OSP finds that there is strong evidence to suggest that Mr Kyei’s decision to issue a customs advance ruling for the applicant was procured through influence-peddling or trading of influence by Ms Asomah-Hinneh by employing her position as a member of the Council of State and member of the Board of Directors of the GPHA,” the report, signed by the Special Prosecutor, Kissi Agyebeng, said.

However, Ms Asomah-Hinneh had refuted any wrongdoing and said she was not aware of the report or its findings and would speak to it once she apprised herself of the facts from the management of Labianca Company Limited.

“I cannot give any comment because I have not seen any report from the Special Prosecutor. I do not even know that the report is out,” she told the Daily Graphic.

Also reacting to the report, the Commissioner of the Customs Division of the GRA, Colonel Kwadwo Damoah (retd), accused the Office of the OSP of attempting to discredit him.

He explained that the OSP was trying to indict Mr Kyei “and myself and anyone who has read that report very well will know the basis of that report is hollow”.

Meanwhile, the management of the GRA, in a response to the OSP report, said it had taken steps to ensure that all allegations of impropriety hanging on the neck of any of its staff were promptly and decisively investigated.

It added that all cases of tax evasion or other acts that were contrary to the laws governing the authority would be dealt with.

In a statement signed by the Commissioner-General of the GRA, Rev. Dr Ammishaddai Owusu-Amoah, and released last Sunday, the GRA dissociated itself from comments made by Col Damoah (retd) on the outcomes of the investigations at the Customs Management Retreat on Wednesday, August 10, 2022.

It said the comments were made in Col Damoah’s personal capacity, and that they did not convey the opinion of the board and the management of the GRA.