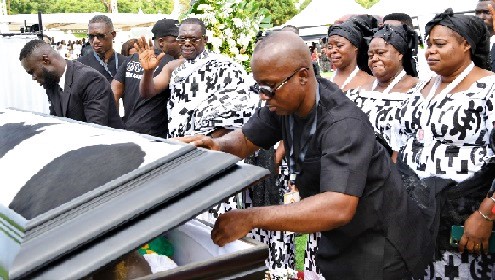 Dr Joseph Siaw Agyepong (left), CEO of Jospong Group, waving goodbye when the casket containing the remains of his father, Opanyin Samuel Kwame Agyepong, was being closed during the burial service at the State House in Accra. With him are some of the siblings
30.5k Shares

A sea of personalities, including people from the business community, politicians, traditional leaders, clergymen, high ranking government officials, Members of Parliament, members of the diplomatic community and other political figures, last Saturday, converged on the forecourt of the State House to pay their last respects to Opanyin Samuel Kwame Agyepong, the father of the Executive Chairman of the Jospong Group of Companies (JGC), Dr Joseph Siaw Agyepong.

They were part of the hundreds of sympathisers who came from all walks of life and thronged the State House to mourn with the family who organised a befitting farewell ceremony for the father of the man, now simply referred to as Jospong.

It was a solemn event with various tributes eulogising Opanyin Kwame Agyepong, who died in June this year at age 98 after a short illness.

By 8am, the casket containing the remains of the late Opanyin Agyepong had arrived and ready for filing past.

For those in the Lord, he said death was just the beginning of joy and hope, adding that pain and misery would be the portion of those who did not know God.

“If you are here and you don’t have Christ, then your life is in crisis no matter what you have done or accomplished in life,” he warned.

“When your last trumpet of death is sounded, the one with Christ becomes more hopeful while those without Christ start with a life of pain and misery,” the man of God said.

About half past midday, after tributes and the biography of the late colossus had been read, the casket containing his remains was lifted for burial at Obo Kwahu in the Eastern Region.

Opanyin Agyepong was born on June 7, 1924 at Banka in the Eastern Region of Ghana to Opanyin Kwaku Kissi (aka Kwaku Nyame) and Obaapanyin Yaa Anumwah both deceased and distinguished natives and members of the Obo Aduana Clan.

He was a son who in time became an outstanding man through ingenuity, enterprise and hard work.