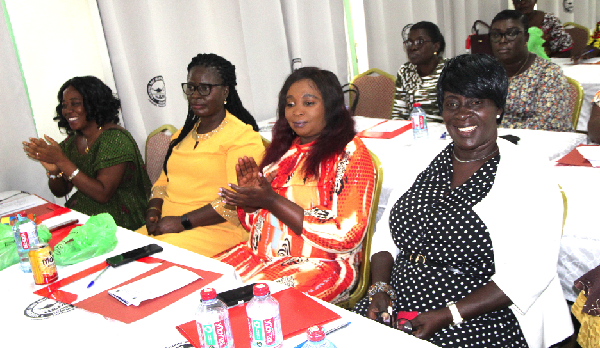 •Members at the nation wide training of women in local leadership at the nurses and midwifery council in Accra. Picture: ESTHER ADJORKOR ADJEI
30.5k Shares

The National Association of Local Authorities in Ghana (NALAG) has organised a capacity-building training workshop for women in local government in the Greater Accra Region.

The training forms part of the "Nationwide women in local leadership training of NALAG" which is aimed at building the capacity of female assembly members across the country to maintain their positions and encourage other women to stand in elections at the local government level.

Having visited the Central, Volta, Northern, Eastern, Western and other regions in the country, the final session was held for female local assembly leaders in the Greater Accra Region.

The workshop, which was attended by 70 women, was held at the Nursing and Midwifery Council at the Ayawaso Municipal Assembly.

It was in accordance with the Sustainable Development Goal 5.5.

The Director-General of the National Disaster Management Organisation (NADMO), also the President of NALAG, Eric Nana Agyemang-Prempeh, said the training was a materialisation of his key
vision towards effective and increased women participation in Metropolitan, Municipal and District Assemblies (MMDAs).

According to him, there had been significant progress of women participation in leadership.

However, at the local government level, the representation of women was still low.

He intimated that reasons such as patriarchy, custom, religion, inadequate prioritisation of gender equality in the governance architecture, increasing cost of doing politics, reduction in lobbying and advocacy by women’s group and gender advocates accounted for the low representation of women at the MMDAs.

For that reason, Mr Agyemang-Prempeh posited that engaging women in a continuous capacity training would improve their performance in executing their duties, as well as encourage other women to participate in local government and stand in elections.

The training will prepare the participants to be well vexed in their roles and responsibilities as assembly members, Municipal Chief Executives (MCEs), in order for them to do their work well and excel.

Additionally, it is tailored to help boost women's capacity in terms of decision making in leadership.

Mr Agyemang-Prempeh added that the association would in the coming months liaise with the Federation of Canadian Municipalities (FCM), Commonwealth Local Governments and other stakeholders to develop a gender strategy to mainstream gender issues in MMDAs in the country.

Furthermore, it would reintroduce the NALAG Women Conference, which would be focused on creating the platform for female assembly members to learn, share, network and build the requisite skills towards the discharge of their duties.

The Women Caucus Representative of NALAG, Gladys Otae Osei Addo, expressed worry about the delay in passing the affirmative bill.

She explained that the Affirmative Action Bill would establish fair access to employment opportunities to create a workforce that was an accurate reflection of the demographics of the qualified available workforce in the relevant job market.