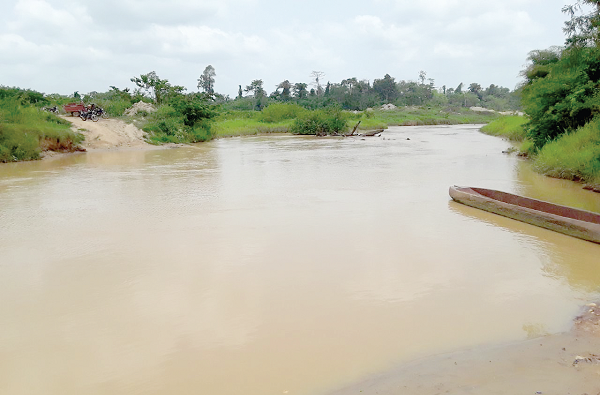 The Deputy Minister for Lands and Natural Resources in charge of mining, Mr George Mireku Duker, has appealed to traditional leaders in the mining communities to help the government to protect water bodies by stopping people from mining in them.

He expressed worry about the wanton destruction of the water bodies by small-scale miners in the full glare of chiefs and called on them not to sit aloof, but get involved in the protection of water bodies.

He said it was part of traditional leaders’ duty to protect the natural resources, including water bodies within their jurisdiction.

Mr Duker made the appeal last Thursday when he toured the banks of the River Offin in the Ashanti Region, during a fact-finding mission. The visit was at the instance of the President, Nana Addo Dankwa Akufo-Addo, and the sector minister, Samuel Abu Jinapor.

Mr Duker was at Ntobrosu in the Atwima Mponua District to assess the situation following the burning of three excavators and a house belonging to a small-scale miner by military personnel about a month ago.

On February 23, this year, military personnel invaded the Ntobrosu community where they set ablaze three excavators parked in front of a house belonging to one Amos Gyamfi, a resident of the town and a small-scale miner.

They also allegedly set fire to containers with fuel in them, leading to the burning down of the seven-bedroom house belonging to Mr Gyamfi.

The entire house was razed to the ground rendering the 14 occupants of the house homeless.

The visit was, therefore, to afford the minister the opportunity to interact with the victims and also inspect the scene of the incident, to enable him to advise the sector minister and the President on the way forward.

Mr Duker was taken to the scene of the incidents which was not far from the River Offin and the burnt excavators.

Contrary to the claims by the military that the excavators were far from the house that got burnt, during the visit, it was observed that one of the excavators was right in front of the house, while the two others were a distance away.

He said per the reports that he had received, the excavators were tracked from the riverside to the house and he realised that the distance from the bank of the river to the house was not that far.

“The houses are close to Offin and that I wouldn’t say also warranted the burning,” he said and believed that the military personnel could have exercised restraint and treated the situation with some human touch.

The minister said there was the need for all citizens to protect water bodies in the country and not to allow anyone to mine in them.

He said past leaders from the town knew that there was gold in the river but they did not allow anyone to mine it due to the importance of the water body to the community and the region.

Mr Duker said aside from the activities of the illegal miners affecting the river, “these miners also use mercury, thus poisoning the river and endangering the lives of the communities that depend on it as a source of drinking water”.

Earlier, the Chief of Akrofosu, Nana Atakora Mensah, expressed his dissatisfaction at the action of the military which led to the burning down of the house .

He said if the people of the town had not restrained themselves, another story would have been told and said the military were very high handed in handling the issue.

He appealed to the government through the minister to compensate Mr Gyamfi for his loss.

Earlier, the minister inaugurated a District Community Mining Committee to oversee mining activities in the district and also prospect for a site to be used for community mining, where the activities of the miners would be regulated.

The committee is headed by the District Chief Executive of Atwima Mponua, Isaac Kofi Marfo, with members from the Environmental Protection Agency, the Minerals Commission, the traditional council and the district assembly.