Graphic gets praise at Barker-Vormawor hearing 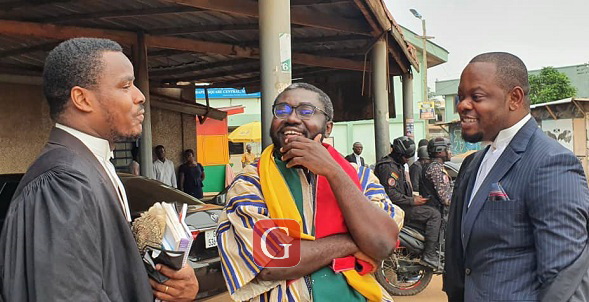 The Presiding Judge of the Ashaiman District Court, Mrs. Eleanor Kakra Barnes-Botchway has singled out the Daily Graphic and Graphic Online for praises, commending the GCGL platforms for consistency and accuracy in its reportage on proceedings in the treason felony case against a convener of the #FixTheCountry Movement, Oliver Barker-Vormawor.

The Judge at Tuesday's hearing lamented what she said was the failure of many media houses and journalists following the case to crosscheck facts with the Registrar of the court if they have challenges.

"I get disappointed whenever I read reportage of the case as most media houses do not take the trouble to get the details right," she lamented.

"I expected the media to always liaise with the Registrar of the court whenever they have challenges with what was said in court to aid their reportage on the case by way of crosschecking the details, the name and position of the judge; prosecutors and defense counsel before going to bed", she added.

The Daily Graphic and Graphic Online have been consistent in providing detailed and accurate reportage on the proceedings, and "I expected that other media houses will also do same", Mrs. Barnes-Botchway said

State Prosecutors
On the case itself, state prosecutors requested for a further one month adjournment to enable them gather and file the necessary documentations to commence committal proceedings.

An Assistant State Attorney, Ms. Anastacia Karimu told the court that the Attorney General's Department on March 23, 2022 dispatched its advice to the police recommending that Mr Barker-Vormawor be charged with the offence of treason felony.

"We however needed more information from the Police to prepare the Bill of Indictment and the Summary of Evidence which the police have asked that we give them two weeks to do so," Ms. Karimu told Mrs. Eleanor Kakra Barnes-Botchway, presiding, a Circuit Court Judge who is sitting additionally as a Magistrate.

Charge
For an alleged post on social media platform, Facebook, suggesting that he would do a "coup" if Parliament was to pass the Electronic Transactions Levy (E-Levy) into law, the State arrested Mr Barker-Vormawor for alleged treason on February 11, 2022 at the Kotoka International Airport upon arrival his from the United Kingdom where he is based.

On March 18, 2022, a Tema High Court granted him a GH¢2 million bail with two sureties, after spending 35 days in detention. He was however not charged with any offence during his period in detention. He was formally charged on 31 March 2022 with Treason Felony based on advice of the Attorney-General.

The Judge however enquired from the prosecution why she was not served a copy of the AGs advice sent to the police.

Ms. Karimu responded that she did not know that they were expected to copy the court.

The Police Prosecutor, DSP Sylvester Asare intervened and said that since it was an advice between a lawyer and client, the judge could not have access to it.

The Judge however, pointed out to the prosecution that, as standard practice, she often receives such to allow her follow cases she is sitting on.

Mrs. Barnes-Botchway however, urged the prosecution to speed up with its investigations to allow the case to proceed and adjourned to May 31, 2022.