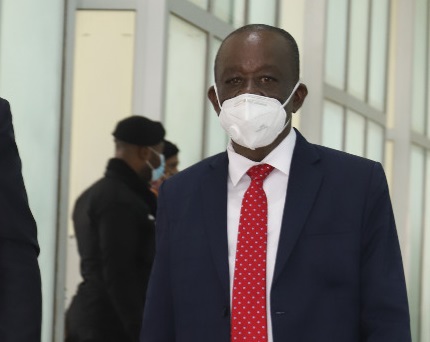 The Minister of National Security-designate, Mr Albert Kan-Dapaah, has stated that government will unravel the whereabouts of missing excavators seized by the state during the fight against illegal mining.

He said the government was making concerted efforts to conclude investigations into the missing excavators.

Mr Kan-Dapaah, who occupied the same ministry from 2017 until January 6, this year, was answering questions when he appeared before the Appointments Committee of Parliament last Wednesday.

He was quizzed on a wide range of national security issues, including the threat posed by illegal mining, popularly called galamsey.

The committee sought updates on how far the government had handled allegations that some excavators that were seized from illegal miners had disappeared.

In his response, the minister-designate said given that a "huge amount of the taxpayer's money" was injected into the galamsey fight, every effort would be made to get to the root of the missing excavators.

Mr Kan-Dapaah indicated that although considerable success had been achieved in the galamsey fight, "a lot of mess" had been created in the fight, and the government was doing "thorough investigation" to come out with a comprehensive report on the issue.

On how much was put into the galamsey fight, he said the amount was "colossal" but he was not the right person to provide those figures.

The minister-designate said the government would revisit the galamsey fight to ensure that insecurity emanating from that sector was dealt with.

On the issue of military invasion of Parliament during the election of the Speaker of the Eighth Parliament, Mr Kan-Dapaah said he had no knowledge about the deployment of the military into the chamber that night as had been purported by some people.

Rather, he indicated that he learnt later that a certain commander directed the military to come into the House to restore order.

When the Member of Parliament for North Tongu, Mr Samuel Okudzeto Ablakwa, asked him to disclose the identity of the said commander, he said he could not immediately remember.

Touching on the brouhaha surrounding the deployment of soldiers to the country's border towns during the electioneering exercise, Mr Kan-Dapaah reiterated that the deployment was done purely on national security basis.

"I want to use the opportunity to explain to the whole country that the deployment of the military to the borders had nothing to do with the registration exercise, but to make sure that terrorists do not enter our country," he said.

The minister-designate also said it was not entirely true that the military were recalled from the borders after the election-related activities.

Mr Kan-Dapaah explained further that the presence of the military in the Volta Region was partly because of the activities of the secessionist group in the area.

Responding to the killing of some persons by some security officers during the December 7 elections, the minister-designate said investigations were underway to determine the circumstances behind the killings.

He noted that although available evidence suggested that some of the shootings that resulted in the death of the persons could have emanated from the military, the culprits were yet to be identified.

Mr Kan-Dapaah, however, gave an assurance that the necessary steps would be taken to get to the root of the matter.

Some members of the Minority side of the committee said they were ready to provide all material evidence to the minister-designate to help in the investigation.