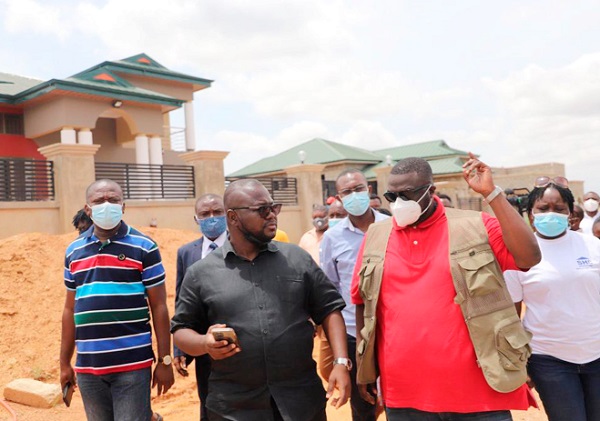 The Ministry of Works and Housing is partnering the private sector to develop the Kumasi Affordable Housing Project.

Already, the ministry has acquired a 200-acre plot at Dedesua in the Bosomtwe District in the region to start the project.

The Kumasi Affordable Housing Project is part of the government’s action to build affordable housing units to reduce the national housing deficit.

During an inspection tour of the project site at Dedesua yesterday, the sector minister, Mr Francis Asenso-Boakye, said even though the State Housing Company (SHC) would be the anchor developer, there would be other private developers.

He said the developers would be encouraged to use locally produced materials, including burnt bricks, to drastically reduce the cost of houses and make them truly affordable.

He said similar projects would be undertaken in Accra along the Amrahia area and in the Eastern Region close to Nsawam.

Mr Asenso-Boakye said the government would support the private sector in the development of the affordable housing enclave by extending services such as water and electricity, and by also constructing the roads leading to the project sites.

Currently, he said, the ministry was studying the designs for the enclave, which would include bungalows and high-rise buildings.

Already, he said, the Ministry of Works and Housing was in talks with the ministries of Education and Health to consider using locally produced burnt bricks for the construction of classroom blocks and community-based health planning and services (CHPS) compounds to cut down the cost of projects.

He said aside from reducing the cost of maintenance of the buildings, bricks were affordable, robust and bulletproof, and as such more durable as compared to cement blocks.

The minister also visited and inspected work at the J A Kufuor Estate being constructed by the SHC at Pokukrom in the Atwima Nwabiagya Municipality.

He later visited a private burnt bricks manufacturing company at Mfensi to learn at first hand the operations of the factory.

The Managing Director of SHC, Mr Kwabena Ampofo Appiah, expressed satisfaction with the progress of work at the J A Kufuor Estate, and expressed the hope that the project would be completed within the next 12 months.

He said the outbreak of COVID-19 in Ghana last year caused the company some eight months delay in the construction schedule.

He said the company would continue to find ways of reducing the cost of housing in the country by using locally produced building materials in its projects.