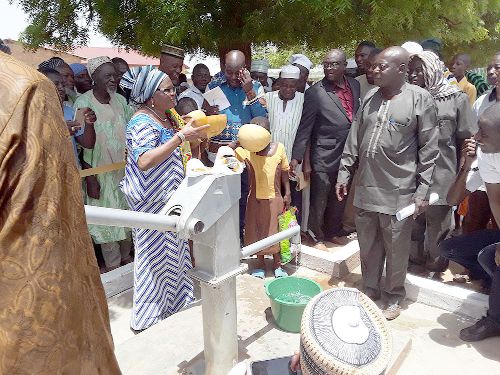 The gesture formed part of the GNPC's programme to help address the needs of deprived communities, including education.

Inaugurating the boreholes at the school, the Executive Director of the GNPC Foundation, Dr Dominic Eduah, said in all, 100 boreholes were to be constructed nationwide, out of which 60 would be allocated to the five regions of the north.

Dr Eduah further stated that the foundation had supported 200 Ghanaian students to further their studies in Medicine in Cuba.

He added that the foundation had also provided 45 six-unit classroom blocks to support the free senior high (SHS) school programme.

The executive director appealed to the beneficiary communities to own the boreholes through regular maintenance.

In a speech read on her behalf, the Upper East Regional Minister, Ms Paulina Abayage, said the intervention was in line with the government's efforts to draw the country closer to the attainment of the Sustainable Development Goal (SDG) Six by the United Nations, which emphasises the provision of potable water to all by 2030.

According to Ms Abayage, the government was also constructing a water treatment plant at Tono, and that upon completion, it would serve 30 communities, including Navrongo, Bolgatanga, Bongo and some parts of the Talensi District.

She added that boreholes and lavatory facilities were being constructed across the region as part of the government Special Initiative projects.

The Headmaster of the Sagabo Naa Gbewaa Junior High School, Mr Issifu Mahama, expressed appreciation to the GNPC Foundation for its intervention.

He said the borehole facility would not only provide water for the school and its environs, but also improve on the contact hours of pupils.

Mr Mahama said the school, established in the 1960’s, lacked the necessary facilities. He, therefore, appealed to the foundation to support them to facilitate effective teaching and learning.