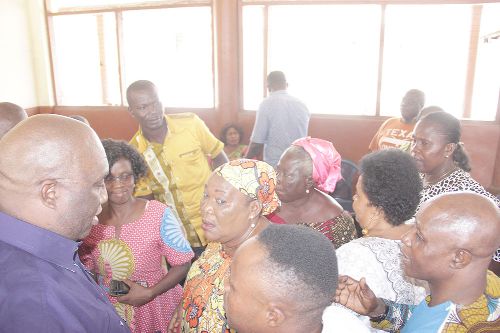 The Ministry of Railway Development is in talks with other stakeholders to set up a taskforce that will help clamp down on illegal trading activities on rail lines in the Accra metropolis.

The taskforce will, among others, help prevent traders from encroaching on the Accra rail line and also bring offenders to book.

Membership of the taskforce will be known in two weeks’ time and will include the police, the Accra Metropolitan Assembly (AMA), traders and rail workers, the Minister of Railway Development, Mr Joe Ghartey, said.

He stated this at a stakeholder engagement with traders from the Kantamanto Market in Accra yesterday.

The initiative comes almost six months after the traders along the rail line stretching from the Central Business District of Accra to the Graphic Road were cleared to make way for the railway redevelopment project by the government.

After clearing encroachers from the stretch of the rail line, the Ghana Railway Development Company built a wall to prevent further trading activities there.

The traders, however, complained that the building of the wall made it difficult for customers to access the Kantamanto Market.

They, therefore, appealed to the sector minister to intervene so that the eight gates that had been created after the building of the wall would be opened to the public.

Following that appeal, Mr Ghartey had been engaging key stakeholders on the way forward to bring sanity to the area.

The minister later announced that the gates would be opened in two weeks.

Touching on allegations that some railway workers had been induced with money to facilitate the illegal trading activities on rail lines, Mr Ghartey warned of drastic sanctions against culprits.

He stressed that any worker who was caught perpetrating the illegality would be made to face the full consequences of their action to serve as a deterrent to others.

"We have information that some of the rail workers are collecting money and allowing illegal trading activities on rail lines, but I want to warn that we will crack down on them," Mr Ghartey said.

The Asiedu Keteke AMA sub-Metro Chairman, Mr Seth Raymond Tettey, said the decision to set up the task force was a step in the right direction.

He said it would help monitor the activities of traders, especially when the gates leading from the rail lines to the Kantamanto Market were opened to the public.

The Commander of the Railway Police Station, Deputy Superintendent of Police (DSP) Emmanuel Ofori-Asante, said 85 suspects had been arrested for various offences along the Accra-Circle stretch of the rail line over the last two weeks.

He said culprits were arrested for prostitution, drug use, squatting, stealing, violent attacks on passers-by and other offences.

According to the commander, activities of squatters were the biggest threat to the Odawna portion of the rail line and gave an assurance that the police would clear all squatters soon.

“We have cleared more than 95 per cent of the squatters along the Accra rail line, and we will clear the rest soon,” he stressed.