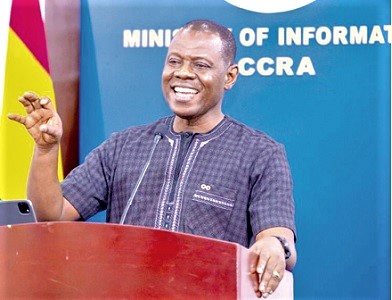 The Ghana Health Service (GHS) has intensified its surveillance mechanism to facilitate, among others, the early detection and containment of the Marburg Virus Disease (MVD) to prevent further spread.

It said the disease was suspected to have claimed one more life, a close contact to one of the initial two deceased cases, on July 21, this year.

At a press briefing facilitated by the Ministry of Information to provide an update on public health emergencies the country was dealing with in Accra yesterday, the Director-General of the GHS, Dr Patrick Kuma-Aboagye, said the main conditions stressing the health system were the MVD, Monkey Pox and COVID-19.

He said the country was also experiencing pockets of poliomyelitis, measles and yellow fever outbreaks.

He said the intensification mechanism included the development of a national response plan, alerting and building the capacity of all district health facilities to be on the lookout for the MVD and the others, carrying out community engagements on prevention and intensifying public education and risk communication in affected regions.

He mentioned others to include the constitution of a rapid response team to support regional and district response teams for detailed case investigations, the provision of more personal protective equipment and other logistics, the development of training tools and educational materials and the training of community-based volunteers and supervisors for intense surveillance.

Continuing with the update on the MVD, he said although the threat of spread was very low in the country, the risk existed because the vector was present.

He said 40 contacts of the case had been identified, out of which 11 were health workers who were undergoing daily monitoring for 42 days.

He said to ensure that no cases were missed, the isolation period had been increased from 21 days, the incubation period for the MVD, to 42 because the new case developed systems after going through the 21-day isolation period.

Dr Kuma-Aboagye said officially the country had confirmed three cases locally but had corroborated two through the World Health Organisation’s Institut Pasteur in Dakar, Senegal as part of its quality assurance policy.

He said the Institut Pasteur could not corroborate one of the locally confirmed cases presented to it and so the test would be repeated, in addition to the new confirmed case locally by the Noguchi Memorial Institute for Medical Research.

Prevention protocol
Dr Kuma-Aboagye said there was currently no vaccine for the disease and appealed to the public to adhere to preventive measures.

He said the GHS was also collaborating with Ghana Wildlife to reduce the risk of spread.

Monkeypox
On Monkeypox, he said the disease had been declared a global public health emergency by the WHO.

He said 34 cases had been confirmed locally between people nine months and 45 years.

“No fatality has been recorded. District Rapid Response teams and Case Management teams have been oriented on Monkey Pox Outbreak Response measures; Dissemination of WHO Preliminary Guidelines on Case Management are being carried out,” he said.

On COVID-19, Dr Kuma-Aboagye said although the country was not out of the woods yet, making the protocols still very critical, it saw a decline in active cases in the last week.

He said 167,959 cases had been confirmed, with an active case of 336, adding that there was one severe case and no critical case.

On vaccination, he said about 18 million doses had been administered as of July 20, this year.