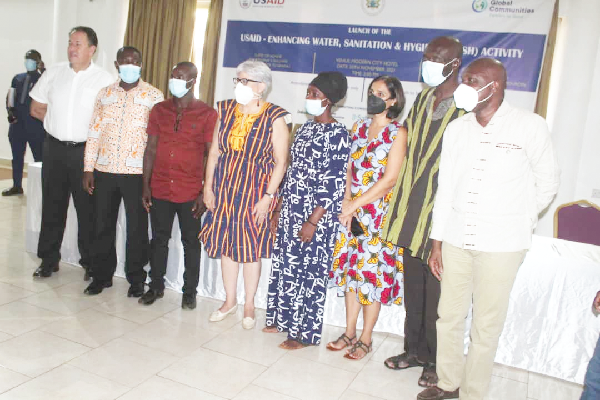 Ms Stephanie Sullivan (4th from left), US Ambassador, with some officials of the project and the Ministry of Sanitation and Water Resources

The United States Agency for International Development (USAID) has launched a $45.5-million project to provide access to basic sanitation services and potable drinking water to about 550,000 people in six regions.

Dubbed, “Enhancing Water, Sanitation and Hygiene (WASH) Activity”, the five-year project seeks to partner and work with the government to enhance governance and planning for WASH projects and improve on the general WASH situation in the beneficiary areas.

Funded by the United States (U.S) government, the project will be jointly implemented by a consortium of 11 organisations led by Global Communities.

Launching the project in Tamale last Friday, the U.S. Ambassador to Ghana, Ms Stephanie Sullivan, reiterated the U.S government’s commitment to supporting Ghana to achieve the Sustainable Development Goal (SDG) Six, which sought to ensure availability and sustainable management of water and sanitation for all by 2030.

“Communities need clean water and healthy sanitation, together we will continue to support individuals, communities, districts, and regions to achieve universal access to clean water and basic sanitation and hygiene services” she stated.

Ms Sullivan said the intervention was an essential action during the COVID-19 pandemic, and beyond to improve the health of Ghanaians and their economy.

The US Ambassador added that the new effort would ultimately empower citizens to adopt sustainable, long-term WASH behavior change to improve their health and economic opportunities.

She indicated that the project builds on over a decade of partnership between the U.S Government and the Government of Ghana on water, sanitation, hygiene and over overall health care delivery systems.

Also through WASH for Health, a ground-breaking partnership with the private sector led to the development of the Digni-loo, a more durable latrine which is 80 per cent cheaper than similar latrines.

The model is now being used in countries around the globe” she noted.

For his part, the Chief of Party of the project, Mr Alberto Wilde said the project would accelerate sustainable improvement in water and sanitation access and improve hygiene behaviours in targeted districts.

He added that “we look forward to more basic school pupils like Isabellla from Oti Region who will influence their families to purchase a handwashing facility for their homes as a result of WASH sensitisation in schools”.

The Minister of Sanitation and Water Resources, Ms Cecilia Dapaah, in a speech read on her behalf, thanked the US government for funding the project, and expressed the government’s commitment to ensuring the successful implementation of the project.

She said the beneficiary regions had poor WASH coverage and expressed optimism that the intervention would go a long way improve on the WASH situation in the areas.

In a related development, the U.S Ambassador inaugurated a medical waste incinerator for the Nanton Health Centre in the Northern Region, a facility constructed with support from USAID, to support operations of the health facility.