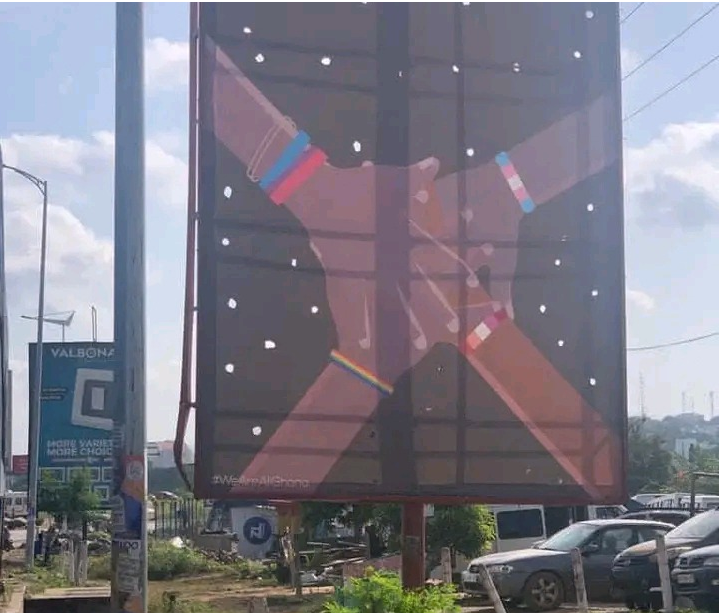 The Members of Parliament (MPs) sponsoring the bill aimed criminalizing the activities of lesbians, gays, bisexuals, transgender, queer and intersex (LGBTQI) have called on the Inspector General of Police (IGP) to, as a matter of urgency, invite those who put up a billboard at the Accra end of the motorway promoting the activities of LGBTQI+ in Accra.

They said the IGP, Dr George Akuffo Dampare, must within the next 24 hours carry out the necessary security operations to ensure that the billboard, which was an upfront to the 1992 Constitution, was taken down.

Speaking on behalf of the MPs at the site where the said billboard has been mounted on Thursday (June 9), the National Democratic Congress MP for Ningo-Prampram, Samuel Nartey George said while he believed that law enforcement may not have seen the billboard, ”we have drawn their attention to it.”

The billboard, which has four hands joined as a team, is said to have been mounted at the strategic spot of the motorway and has the inscription “When all Ghanaians are treated equal no matter where they are or who they love that’s true freedom.”

The MP said the LGBTQI+ group had publicly, on Joy FM, a Ghanaian media outlet, announced that they sponsored and put out the billboard.

He said the persons behind were known and their phone contacts were on their Facebook pages.

“The IGP must, as a matter of urgency, invite them for questioning for them to answer why they sponsored this.

“I do not believe that the state will sit back when a billboard was put up supporting terrorism or money laundering as a way of life. This is an upfront to the Section 104 of our Criminal Offences Act which frowns on bestiality,” he stated.