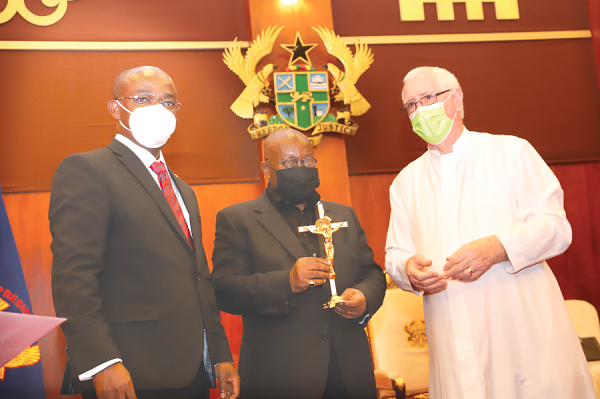 President Akufo-Addo holding a gift presented to him by Rev Fr. Andrew Campbell, Parish Priest, Christ the King Parish, during the meeting. With them is Mr Kingsford Arthur (left), Chairman of the Pastoral Council of the Christ the King Church. Picture: SAMUEL TEI ADANO
30.5k Shares

President Nana Addo Dankwa Akufo-Addo has lauded the Mother Teresa Soup Kitchen initiated by the Christ the King Catholic Church in Accra and thrown his support behind it.

Describing the project that cares for street children as an “exceptionally important and compassionate development”, President Akufo-Addo said “we have to be working towards a situation in the country where, less and less children would be found on the streets because they would either be in school or have gained employment after leaving school.

President Akufo-Addo said this when members of the Pastoral Council of the Christ the King Catholic Church called on him at the Jubilee House in Accra yesterday.

On May 23 this year, the Pastoral Council invited President Akufo-Addo to Christ the King Catholic Church’s 70th milestone.

The President said that day was unforgettable since it was the birthday of the last of his daughters and assured the delegation that he would be sharing the day with the church.

The Christ The King Soup Kitchen is an initiative by Rev. Father Andrew Campbell, the Parish priest of Christ The King Catholic Church in Accra, and supported by the Parish Pastoral Council. The project provides meals, clothes and training for poor children on the streets and was commenced in January 2016 when Pope Francis declared the year as the jubilee year of mercy.

The soup kitchen fed 50 to 60 street children a day and had in the last four years cooked 87,600 meals for children. It also distributed 120 packs of food twice in a week to the homeless that reside under the Kanda overpass and had also, within the four years of its existence, provided 24,960 meals for vagrants who sleep under the overpass at Kanda.

Besides providing food, the soup kitchen also undertakes healthcare programmes such as health screening for the vulnerable at least two times in a year.

Christ the King Soup Kitchen is presently in consultation with the Social Welfare Department for a social welfare centre to be constructed at Osu. The centre, which will provide food and shelter for street children in Accra, will be
named after Mother Teresa, the patron saint of Rev. Father Campbell.

The project is estimated to cost about one million Ghana cedis and it will have a conference hall, a boardroom and rooms for the children.

President Akufo-Addo said the step taken by the church was a worthwhile initiative and would be given support to push it forward.

He recalled his long-standing relations with Rev. Father Campbell. He said he came across Father Campbell when he (Akufo-Addo) was board chairman for DHL.

President took time to wish Father Campbell well on his birthday and said the government would continue to value his presence in the country and, even more, for dedicating his life to the well-being of its citizens.

Father Campbell presented a framed picture of Mother Teresa and a crucifix to the President.

The Chairman of the Parish Pastoral Council, Mr Kingsford Arthur, said the team was at the Presidency to congratulate President Akufo-Addo on his second term and also share the moment with him.

He thanked President Akufo-Addo for donating to the project and used the opportunity to invite him to be part of the 70th anniversary of the church, which falls on May 23, this year.

Mr Arthur told the President that Rev. Campbell would celebrate his 75th birthday today and that a special Mass would he held for him and a thanksgiving Mass also on Sunday to commemorate his birthday.