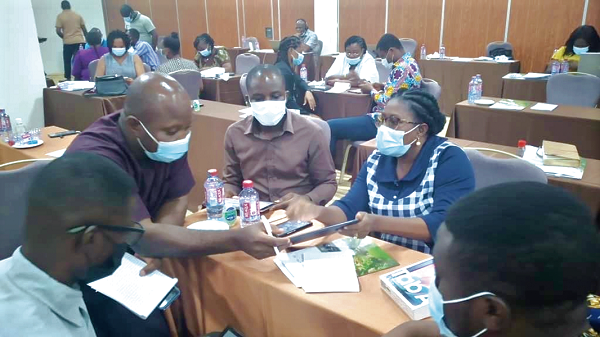 Participants trying their hands on the digital platform
30.5k Shares

District Social Welfare (DSW) officers across the country have been trained in the operation of the decentralised Management Information System (MIS) and the Monitoring and Evaluation (M&E) e-Reporting platform.

The programme was organised by the Livelihood Empowerment Against Poverty (LEAP) programme secretariat, with support from UNICEF to help make the work of DSW officers more effective by familiarising themselves with the digital platforms, including the LEAP operations manual.

LEAP is Ghana’s flagship cash transfer programme aimed at reducing poverty by protecting the most vulnerable against economic shocks.
It provides bi-monthly cash transfers of between GH¢80 and GH¢334 to beneficiary households to improve food security, encourage savings and investment, as well as the general well-being of children of beneficiaries.

The Deputy Director of the LEAP Management Secretariat, Mr Myles Ongoh, in an interview with the Daily Graphic said, access to the digital platforms would guide DSW officers to log in cases for resolution and also help them monitor the number of LEAP beneficiaries in their various communities, among other objectives.

He said the M&E e-reporting platform would also allow the officers to gather information on the field, file reports and report directly to the LMS team at the head office in Accra irrespective of their location in the country.

“This is an improvement on the practice in the past where DSWOs would have to finish all their activities and manually fill out report forms and send to the LMS for analyses, a cumbersome process which often suffered delays.

“Giving DSWOs direct access to data of beneficiaries in their districts is also in line with data protection practices as it stops the practice of sharing data via email, which is not advisable for privacy concerns,” Mr Ongoh said.

He further explained that the training was necessitated due to the fact that there had been some modifications made to the existing manual which affected the operations of the LEAP scheme and that had to be communicated to DSWOs who were stakeholders of the scheme.

LEAP provides bi-monthly cash payments to extremely poor households in all districts of the country.

In addition to the cash transfer, the intervention also offers free registration for the National Health Insurance Scheme to beneficiaries.

To be a beneficiary, poor households need to have at least one elderly member living with a disability or an orphaned and vulnerable child.

The initiative had been expanded to include households with pregnant women and mothers with infants. It also supports widows for the first 1,000 days.

It was first piloted in 10 districts in Northern Ghana in 2015, and the category of women who are pregnant or with infants under one was later mainstreamed into the national programme in 2016.