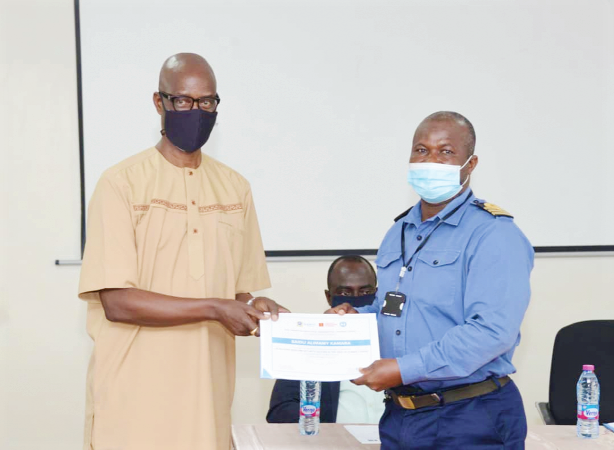 Participants in a 10-day course on maritime security organised by the Kofi Annan International Peacekeeping Training Centre (KAIPTC) have been tasked to develop standard operating procedures (SOP) for their organisations and find innovative solutions to deal with the security threats in the Gulf of Guinea ( GoG).

In all, 21 officers, made up of the navy, marine police, private shipping companies, among others from 10 countries in West and Central Africa, including Ghana, Liberia, Cameroon, Congo Brazzaville, Cote d’Ivoire, Gabon, Nigeria, and Sierra Leone participated in the course.

The course, titled “Developing Maritime Security Culture in the Gulf of Guinea,” exposed the participants to the emerging maritime security challenges in the GoG and the opportunities that could be exploited to counter the menace.

It was aimed at contributing to improving security in the GoG by deepening collaboration and cooperation among agencies responsible for maritime security.

The training formed part of activities marking a three-year project, dubbed “Enhancing regional research, capacity building and convening of stakeholders towards a safer maritime domain in the Gulf of Guinea,” sponsored by the government of Denmark.

The participants, as part of the course outline, toured the Multinational Maritime Coordination Centre (MMCC) Zone F, located at the Christiansburg Castle where they were offered hands-on experience on the operations and coordination roles of the zone.

Speaking at a ceremony to close the course at Pampram in the Greater Accra Region last Wednesday, the Dean of Academic Affairs at the KAIPTC, Professor Kwaku Osei-Hwedie, said the course was a critical step towards finding solutions to the insecurity in the GoG.

“The maritime resource is a shared one, and no agency or state for that matter can independently survive without collaboration and coordination on how to harness and safeguard it for optimal use.

For his part, the Head of Conflict Management Programme at the KAIPTC's Faculty of Academic Affairs and Research, Mr John Pokoo, said although countries along the GoG had agreed to work together to combat maritime crime, it was important for the respective agencies to put adequate measures in place to ensure a successful implementation of the agreements.

He urged the participants to be ambassadors of the KAIPTC and take advantage of the networking opportunities offered them to deepen their cooperation with other agencies.

In an interview, a Port Captain at Maersk Ghana, Mr George Woanya, who represented the shipping industry, described the course as timely, saying that the insecurity of the GoG was a major concern for all shipping companies that plied the route.

He said the menace had serious economic implications and could lead to a hike in prices of imported goods if not tackled.