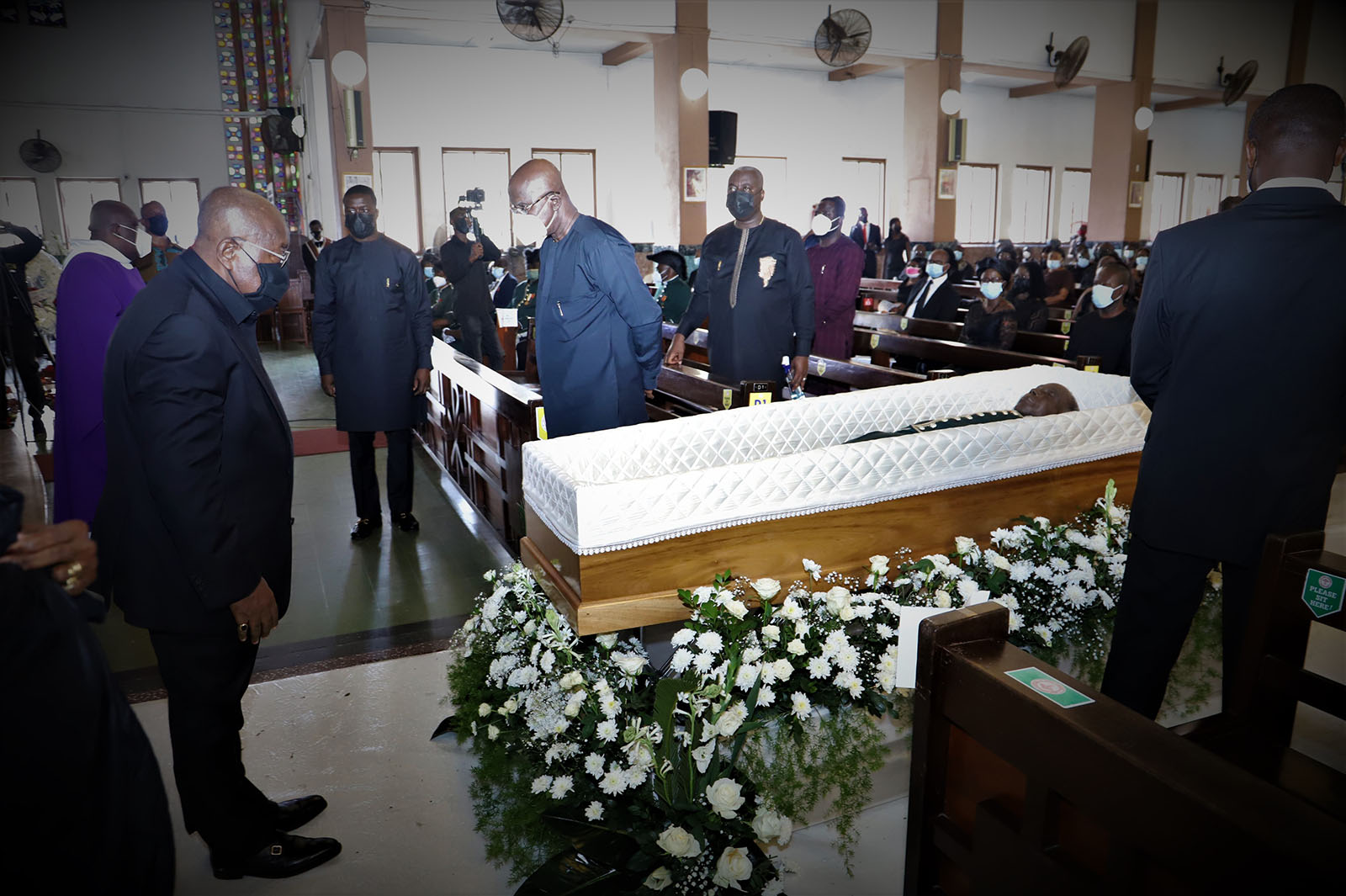 The remains of Professor Emeritus George Kwabena Effah Benneh will be interred today (March 27, 2021) at a private ceremony in his hometown, Akrofro, near Berekum in the Bono Region.

Yesterday, a Requiem Mass, celebrated under the observance of the COVID-19 protocols, was held at the Holy Spirit Cathedral in Accra after which the body was transported to Akrofro for a similar filing past and Mass after which he will finally be given a private burial.

The solemn ceremony was used to celebrate the former Vice Chancellor of the University of Ghana who died at his residence in Accra on February 11, 2021 after a prolonged illness.

In attendance were people from diverse backgrounds including President Nana Addo Dankwa Akufo-Addo, the Asante Asokorehene, Nana Dr S K B Asante; the Board Chairman of the Ghana Cocoa Board, Mr Hackman Owusu Agyeman, and the Chairperson of the Electoral Commission of Ghana (EC), Mrs Jean Mensa, who came to pay their last respects.

Tributes by his wife, children, grandchildren, other members of the extended family, as well as institutions, were read to eulogise the professor.

In her tribute, the widow, Mrs Adelaide Mary Benneh, described her husband as her mentor and confidant who understood her at all times and said he loved his country and was ready to sacrifice his energy and resources for it.

She said she was grateful to all, especially the Catholic priests who visited the husband and administered communion to him at home.

She also thanked former President John Agyekum Kufuor who she said was instrumental in sending her husband to the United Kingdom (UK) to seek medical treatment when the need arose.

Mrs Benneh said the initial care and rehabilitation for her husband was very crucial and it played a big part in the survival of Prof. Benneh for so many years.

She further singled out Dr Albert Apaloo, whom she described as the personal doctor of Prof. Benneh for 20 years, and said the family was grateful.

In the Homily, the Catholic Bishop of the Konongo Mampong Diocese in the Ashanti Region, Most Rev. Joseph Osei Bonsu, said the life of the late Professor was a testimony that God was the solver of all problems.

He said Professor Benneh, prior to his death, endured severe pain as a result of ill health but he never gave up.

Most Rev. Bonsu advised the mourners to take a cue from Prof. Benneh’s selfless and active involvement in church activities which led to him being knighted.

He said death was inevitable, emphasising that the death of the Professor Emeritus was yet again a reminder of that fact.

“ Death will certainly come to all of us and he has climbed the ladder of death which all of us will climb one day.

Born on March 6, 1934 at Berekum, Professor Benneh was the first of four children.

He attended Achimota School and later proceeded to the University of Ghana in 1954 as one of four students who won the then Shell Ghana Independence Scholarship for tertiary students.

After a successful degree programme, the young Benneh travelled to London for his postgraduate studies during which he obtained his PhD at the London School of Economics in 1964.

He dedicated a greater part of his career to teaching and academia, going all the way to become the fifth Vice Chancellor of the University of Ghana, but the eighth person to head Ghana’s premier university.
His tenure was from 1992 to 1996.

At the beginning of his career, just before his doctoral studies, Prof. Benneh taught Geography at Achimota School in 1961.

He later became a lecturer in the Department of Geography at the University of Ghana, Legon, in 1964, and went on to become a Senior Lecturer (1973), Associate Professor (1976) and Full Professor in 1989.

He was a distinguished visiting professor and guest speaker at the 50th anniversary of the Fulbright Hayes Fellowship Anniversary Conference in Atlanta in 1996.
Prof. Benneh authored over 13 books and booklets and 70 other publications in Geography, Environment, Land Tenure and Land Use, Population, Education and Public Administration. Some of his books include A New Geography of Ghana (1970) and Technology Should Seek Tradition: Studies on Traditional Land Tenure and Small Holder Farming Systems in Ghana (2011).

Between 1979 and 1981, Prof. Benneh was appointed the Commissioner and Minister of Lands, Natural Resources, Fuel and Power.

After the June 1979 and December 1981 coups d’état, he was jailed without trial by the military on allegations of corruption, spending a total of 10 weeks in prison before being set free.

He served on several boards and committees at different times both locally and internationally, among them the Graphic Corporation Board from 1972 to 1974.

Prof. Benneh was appointed the first President of the Federation of African University Sports (1974) and also the first Chairman of Africa Regional Council of the International Association of University Presidents.

He was awarded the “Star of the Volta” by President Kufuor and was also a Papal Knight of the Catholic Church.