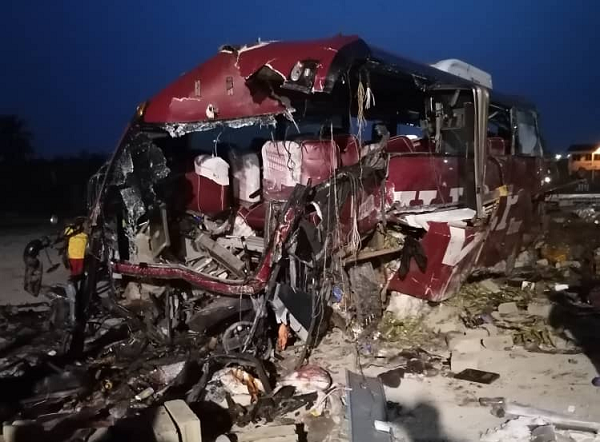 Preliminary police investigation into the ghastly road accident at Akyem Asafo on the Accra-Kumasi highway has attributed it to driver recklessness.

The driver of one of the two buses involved in the accident was said to have attempted to overtake four long vehicles in a row, leading to a head-on collision.

As of 4 p.m. yesterday, 19 persons had been confirmed dead in the accident that occurred at about 1.30 a.m. yesterday when two KIA Granbird passenger buses, one of them VIP branded, collided head-on.

Both drivers died in the accident.

Police said their investigations revealed that the driver of the Kumasi bound bus tried to overtake four long trucks in a row and that led to the collision with the VIP bus.

Several others were also injured and were rushed to a number of health facilities for medical attention.

The accident sent shock waves through the Asafo community and its environs.

Confirming the accident to the Daily Graphic, the Deputy Public Relations Officer (PRO) of the Eastern Regional Police Command, Sergeant Francis Gomado, said the driver of the Kumasi bound bus, on reaching a section of the Akyem Asafo Junction, made an unsafe overtaking.

“He did not observe due traffic regulations and crashed into the other bus,” he said.

He said the accident could have been avoided if the driver who did the overtaking had obeyed road traffic regulation.

They also visited the Suhum Government Hospital where 15 victims were on admission.

He said all of the victims who were taken to the Asafo centre were treated and discharged.

Five of the victims are receiving care at the Kibi Government Hospital.