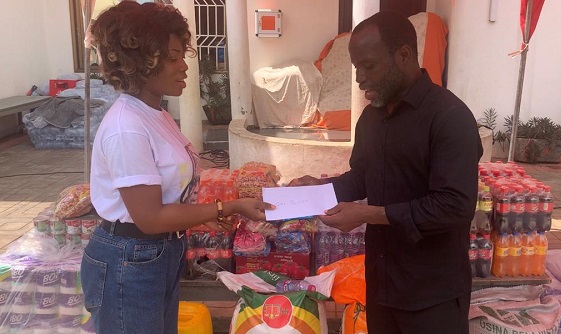 A fan base of music maestro, Kojo Antwi, known simply as Lovers of Kojo Antwi, has donated a number of items to the Motherly Love Orphanage at Kwabenya in Accra.

The donation forms part of plans to mark the birthday of Kojo Antwi, otherwise called Mr. Music Man, come December 24. He has for many years dedicated the day to performing live, close-up concerts before his fans.

At a short ceremony in Accra on Wednesday, November 24, a cheque for GH₵3,000 was also presented to the orphanage.

Loud cheers and remarks of appreciation greeted the gesture, as the children sang and danced.

The founder of the group, Yaa Aso, explained that the donation also forms part of plans to support the vulnerable and orphanages in the country.

“We are here today to celebrate our Father’s birthday with the Motherly Love Orphanage by presenting these items to them, to support their basic needs. This also forms part of our efforts to support the vulnerable in society," she said.

Receiving the items, the founder of the orphanage, Reverend John Azumah thanked the group for the donation and said the money will help a great deal to settle the school fees of some of the 58 children of the orphanage who will soon be writing their exams.

Rev. Azumah called on other benevolent organisations to support them, particularly, in feeding the children and supporting their educational needs.

“We have 58 children, 33 girls and 25 boys. Two of them are in the University, eight in Senior High School, Six just completed BECE and the rest are in basic school. These items will support their feeding, while the money will settle the school fees of the 58 children.

“We thank Kojo Antwi and the group for putting a smile on our faces, and we also call on other benevolent organisation to let the birthday of Kojo Antwi challenge them to support other orphanages and the vulnerable in society,” he said.