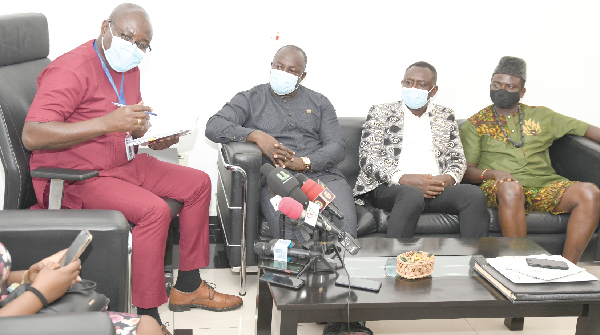 The Ghana Standards Authority(GSA) is committed to improving the ease of doing business for the private sector and providing a level playing field for all enterprises to grow.

To meet that commitment, the authority has given an assurance that it will support the various trade organisations to improve the standards of locally produced goods and ensure that all imported products meet the required national standards.

The Director General of the GSA, Professor Alex Dodoo, who gave the assurance, said that would provide the springboard for the attainment of the government’s economic transformation agenda.

“Businesses want fair trade; they want the standards to be the same, whether the goods are manufactured in Ghana or imported, so the GSA will make the private sector aware of the standards in the country. We want closer collaboration because the GSA sees the success of every trader as its success,” he said.

Prof. Dodoo gave the assurance when the leadership of the Traders Advocacy Group Ghana (TAGG) paid a courtesy call on him at the GSA Head Office in Accra yesterday.

The meeting was to discuss issues of interest and also congratulate GSA boss on his reappointment as the director general of the trade facilitating and inspection authority.

Others were the Kumasi Chairman of the group, Mr George Aggrey; the Treasurer, Ms Irene Victoria Odoom; the Deputy Protocol Officer, Mr Daniel Fosu, and the Deputy Secretary for Kumasi, Mr Silas Osei.

Prof. Dodoo said under the direction of the Ministry of Trade and Industry, the GSA would introduce new regulatory requirements to address health, safety and environmental issues in accordance with international agreements.

“The coronavirus disease (COVID-19) pandemic has disrupted how we trade, but consumers will continue to demand safety and quality assurance, while private and public authorities will continue to scrutinise imported and exported goods for compliance,” he said.

In that regard, he said producers would need reputable evidence that the products and services met regulatory, technical and other requirements, hence the need for certification.

Mr Amoateng explained that the visit was also to show appreciation for the support traders in the country had been receiving from the GSA, under the leadership of Prof. Dodoo, including improvement in testing facilities that had reduced the time spent on securing product certification.

He commended Prof. Dodoo for his vision, which had ensured that the GSA embark on strategic missions that had improved the trading environment in the country, including the enforcement of standards and ridding the market of inferior goods that were normally imported into the country by rogue importers.

Mr Amoateng also intimated that the GSA, under the leadership of Prof. Dodoo, had seen a rise in the promotion of and education on the country’s standards and the creation of new ones, such as the Ghana Building Code.

“I believe one of your legacies, Prof. Dodoo, has been ensuring that elevators or lifts in the country are properly certified for safety,” the TAGG President said.

TAGG is a trade advocacy group established to facilitate trade and support the government in developing new areas of policy in order to tackle unmet trade needs and deal with emerging trade issues in the country.

The group's objectives include mobilising the informal sector to assist the government to achieve its economic transformation agenda and help trade associations to achieve their set objectives.

The group has registered over 6,000 traders and about 54 trade associations across the 16 regions of the country.