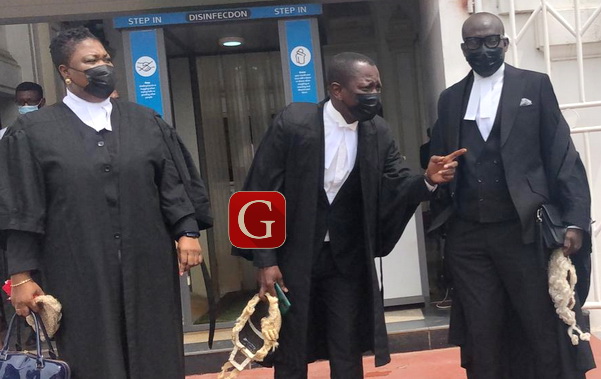 The Supreme Court will on October 26, this year, rule on a review application challenging the court’s decision to prohibit the judge presiding over the trial of a former Chief Executive Officer (CEO) of the Ghana Cocoa Board (COCOBOD), Dr Stephen Kwabena Opuni.

The A-G, Mr Godfred Yeboah Dame, is asking the apex court to set aside its decision to prohibit Justice Clemence Jackson Honyenuga, a Justice of the Supreme Court, who was presiding over the trial as a High Court judge.

A seven-member review panel of the apex court, presided over by Justice Jones Dotse, fixed the date yesterday after listening to arguments from the A-G, Mr Godfred Yeboah Dame, and lawyer for Dr Opuni , Mr Samuel Cudjoe.

Making his case for the review, Mr Dame argued that the Supreme Court committed a fundamental error of law when it took Justice Clemence Honyenuga off the case.

It was his submission that the trial judge did not commit any breach or rules of court or any law when he dismissed a submission of “no case” and ordered Dr Opuni to open his defence.

He argued that there was no basis for the prohibition, as a ruling on the submission was within the jurisdiction of the trial court and, therefore, Justice Honyenuga was performing his duties as required by law.

According to the A-G, even if for the purposes of argument, the trial judge did commit an error, the remedy for Dr Opuni was to appeal at the Court of Appeal but not invoke the supervisory jurisdiction of the Supreme Court to prohibit the judge.

“I pray for the decision of the majority to be reviewed as it contained errors that goes against the administration of justice,” he submitted.

In response, Mr Cudjoe disagreed with the A-G and argued that the Supreme Court did not commit any error of law, but rather applied the law in prohibiting Justice Honyenuga .
Counsel said certain statements made by Justice Honyenuga in his ruling on the submission of “no case” clearly indicated that he (judge) had predetermined the guilt of his client even before he (Opuni) opened his defence.

According to him, the A-G had not met the threshold for review, which was that the ordinary bench ruling should have led to grave miscarriage of justice.

“The A-G wants the court to come up with a new principle that if a party is not happy with a judgment, then he goes for a review,” counsel submitted.

On July 28, this year, the Supreme Court, in a 3-2 majority decision, prohibited Justice Honyenuga from presiding over the trial of Dr Opuni, and a businessman, Seidu Agongo, who have been accused of causing financial loss of more than GH¢217million to the state.

The court held that in dismissing a submission of no case filed by Dr Opuni, Justice Honyenuga made certain pronouncements which could be interpreted that he (judge) had already found the accused persons guilty even before they opened their defence.

Such an act, the court held, gave rise to a likelihood of bias.

According to the court, Justice Honyenuga’s duty at the ruling on submission of no case was to establish whether or not a prima facie case had been made against the accused persons, but the pronouncements he made was as if the prosecution had proved its case beyond reasonable doubt.

Also, the court quashed certain portions of the ruling on the submission of no case in which Justice Honyenuga expunged certain evidence said to be in favour of Dr Opuni.

It said Justice Honyenuga breached the law when he expunged those exhibits as hearsay evidence.

“A reasonably well-informed observer, taking account of the exclusion of the exhibits that appear to favour the accused person and the pronouncements made by the judge which connote that the 2nd and 3rd accused persons have defrauded COCOBOD and it would not have happened but for the applicant (Dr Opuni) herein deliberately and knowingly facilitating it and that by that he has caused financial loss to the state, would come to the conclusion that the judge would not be impartial in the consideration of the any defence the accused person has to put forward,” the court held.

The majority decision was authored by Justice Gabriel Pwamang, who was joined by Justices Agnes Dordzie and Issifu Omoro Tanko .
Justices Dotse and Lovelace Johnson dissented.

Agongo has been accused of using fraudulent means to sell substandard fertiliser to the COCOBOD for onward distribution to cocoa farmers, while Dr Opuni is accused of facilitating the act by not allowing Agongo’s products to be tested and certified as required by law.
The two have denied any wrongdoing and pleaded not guilty to all the charges.