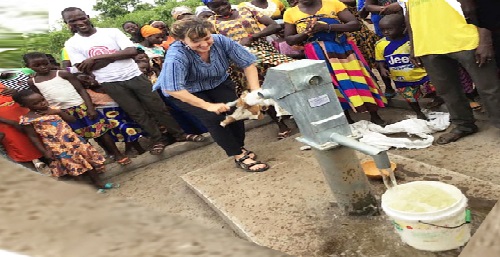 Fifty communities in the Eastern Corridor of the Northern Region are to benefit from a borehole project each.

The $300,000 project, intended to address the perennial water challenges the people have endured over the years, is expected to be completed by the close of this year.

The beneficiary communities are located in Yendi, Nanumba North, Nkwanta, Kpasa, Nanumba South, Zabzugu, Tatale/Sanguli and Saboba, among others.

It is being carried out by an NGO, Rural Water and Development Programme Ghana (RWD P-GH), in partnership with Ghana West Africa Mission and Healing Hands International, a Christian organisation.

In line with this, sod has been cut for the commencement of the project at Janfodo in the Nanumba North Municipality.

According to the Chief Executive Officer of RWDP-GH, Nathaniel Adams Jnr, the project is being sponsored by Ghana West Africa Mission (GWAM) and Healing Hands International of Alabama, and Nashville Tennessee, USA.

He said his outfit was also into health, water, sanitation and hygiene (WASH) programmes, among others, in partnership with organisations such as the UNICEF and WATSAN committees.

He reminded the people that proper sanitation practice was a shared responsibility and, therefore, urged all stakeholders to get involved in the cleaning and protection of the environment at all times.

Mr Adams Jnr said RWDP-GH was the social programme unit of the Church of Christ Ghana, which is concerned with the spiritual and economic upliftment of the people.

The water project coordinator of Healing Hands International, Gillian Kelley, who witnessed the inauguration of one the completed boreholes at Janfodo, described the project as fascinating, saying it would help improve the quality of life of the people who often had to travel long distances for water.

They also inaugurated and handed over a borehole to the Oyodom community in the Nanumba North Municipality.

She said the organisation, which supported borehole projects in deprived communities, had worked in Africa for many years, and described their partnership with RWD P-GH as fruitful.

He said the organisation was also into the funding of livelihood projects for women in agriculture, including irrigation to help reduce poverty in rural communities.

The Vice-President, Operations, of Healing Hands International, Jana Graves Owen, said instead of commending their benefactors, the people should rather thank God “our Lord Jesus Christ who made it possible for us to provide you with safe drinking water”.

The Chief of Janfodo, Obor Nsuribe Koyaja, expressed appreciation to the benefactors for their intervention which, he said, would help reduce the drudgery the people, especially women, went through to have access to water.

According to him, their only source of drinking water is from River Oti which always dries up during the harmattan season.

He said the “people always have to walk long distances to get water which is not even clean”.