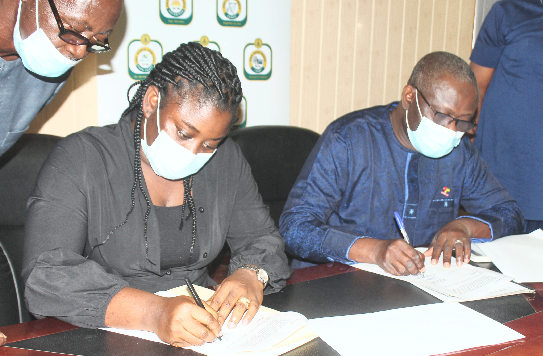 The Ghana Broadcasting Corporation (GBC) has signed a memorandum of understanding (MoU) with the Liberian Broadcasting Systems (LBS) for content exchange and capacity development for staff of the two public service broadcasting institutions.

The broadcast partnership agreement, which was signed at GBC last Tuesday, would also focus on sharing experiences in broadcast technology, training in news production, presentation, programming, digital technology, among others.

Ms. Kemoah was in the company of the Deputy Director-General of the Liberian Public Service broadcaster, Mr. Sorbor George, and a consultant, Mr. Aaron B Kollie, among other personalities.

Prof. Alhassan, who briefed the delegation, said management of the state broadcasting company had launched a transformation process christened “Transforming GBC from Bureaucracy to Business”.

The move, which included retooling of its structures and undertaking a massive re-orientation of its staff, is to enable the company to respond to the new media terrain and stay ahead of its competitors.

Evidence, among these, included new approaches adopted to the station’s morning shows and the rebranding of GTV, live lifestyle channel targeted at the youth.

“Audience now have options so if you do not change to keep their attention, you will lose them to your competitors and so we are developing a new programming philosophy which will bring the youth back to our network,” Prof. Alhassan, who started as a reporter at GBC before branching into academia, said.

He added that management had also established an office for a Strategy and Innovation Coordinator who would integrate the station’s radio, television and online platforms to make its brands stronger.

For her part, Ms. Kemoh commended GBC for the partnership adding: “Together, we can form a sustained partnership and drive the African dream in the communication sector of how we can share experiences to promote the issues that affect us as Africans in the world of politics, agriculture, economics, science and technology.

“Nobody will do it for us, we have to take up the challenge and work together as a people and with the historical ties that we share, I believe that we can start something together to form a whole network in putting issues that affect us in the region,” she said.