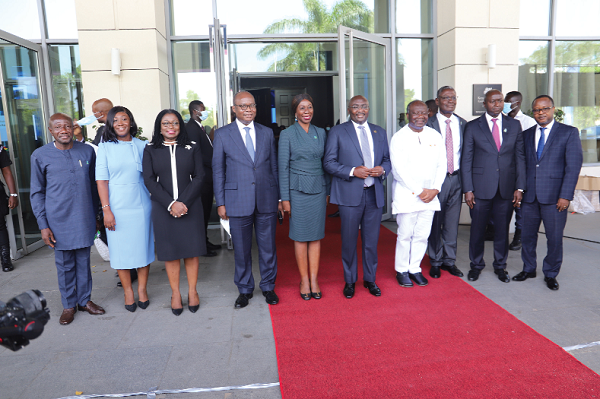 Vice-President Dr Bawumia (5th from right) in the company of Mr Ken Ofori-Atta (4th from right), the Minister of Finance; Dr Ernest Addison (4th from left), Governor, Bank of Ghana, and other dignitaries after the event. Picture: SAMUEL TEI ADANO

The Vice-President, Dr Mahamadu Bawumia, has urged players in the digital financial services sector to form stronger partnerships that will deepen the sector further.

He said the government had laid a strong foundation that would position the country as a hub for digital financial services, and that what was now required was stronger collaboration among stakeholders to further cement the ecosystem.

The Vice-President, therefore, urged banks, financial technology companies (Fintechs), telecommunication companies (telcos), regulators and the government to establish a common platform that would enable them to share ideas, information and feedback.

“Collaboration will provide opportunities for entities with different specialisations to work together to achieve greater goals,” he said.

The Fintech Festival was organised as part of events marking the bank’s 125th anniversary in the country.

Vice-President Bawumia noted that collaboration was not a contradiction to competition, as businesses could compete and collaborate at the same time.

“If we don’t collaborate, then everybody will be in silos, but once we come together, with one ecosystem, then we are able to derive economies of scale from that collaboration.

“We are very focused on inclusion, and this is why it is very important that as we build these systems, we try to bring everybody on a common platform,” he noted.

Using mobile money interoperability as an example, he said that collaboration that brought the players on one platform had gone a long way to deepen mobile money services in the country.

“Before, we had everybody working in different silos and people couldn’t even move money from one platform to another, but once we brought everyone on one platform, we can see the pie is expanding for everybody.

“We had GH¢35 billion worth of transactions in 2015 when there was no interoperability, but that figure increased to GH¢570 billion in 2020 after introducing interoperability,” Dr Bawumia pointed out.

He said the government was targeting GH¢1 trillion value of transaction by the end of this year, which meant a bigger pie for all the players.

“We are going to compete for GH¢1 trillion now, instead of GH¢35 billion, and this is why collaboration does not contradict competition.

We can compete and collaborate at the same time,” he said.

The Minister of Finance, Mr Ken Ofori-Atta, also speaking at the event, said Ghana was at a critical stage in its economic trajectory and must, therefore, be careful not to make the monumental mistake of assuming the digital economy was a thing of the future.

“The digital economy is here with us and it is here to stay. COVID-19 only served as a tipping point for technology adoption and, in some cases, digital disruption,” he said.

That was why the government had, over the years, made massive investments in technology and digitalisation, Mr Ofori-Atta said.

He noted that although the government was not yet where it wanted to be, it had made a good start.

He added that Internet penetration rate was estimated at 50 per cent across the country, with about 15.7 million Internet users.

“While we acknowledge this is a good improvement from 26 per cent in 2017, our objective in government is to do more to ensure that we attain our digital aspirations.

“This is not only a government programme; it requires all players in the sector to think of new ways to support,” he said.

The Governor of the Bank of Ghana (BoG), Dr Ernest Addison, for his part, said the central bank had laid a strong foundation in terms of infrastructure and the regulatory framework to strengthen the government’s digitalisation agenda.

He said the vibrancy in the digital financial eco-system was a product of well thought out and carefully planned programmes and policies spearheaded by the BoG over the past two decades.

Dr Addison noted that banking in the country had gone through some significant changes within the last couple of years, with the industry now characterised by a lot of technology.

“Digitalisation in banking has enabled customers to unlock financial services by online platforms in a seamless manner, without stepping foot in the banking halls.

“The positive aspect of this is the broad accessibility of these technology-driven financial services due to their convenience, efficiency and affordability,” he said.

The Chief Executive Officer of Standard Chartered Bank Ghana, Mrs Mansa Nettey, said the bank did not seek only to take stock of the successes and experiences of its operations but also showcase its leadership in innovation and digital platforms.

“We see it as one of the best opportunities to appreciate Ghana’s digital infrastructure and the great strides it has made in its digitalisation and digital transformation journey,” she said.

Other dignitaries at the festival were the First Deputy Governor of the BoG, Dr Maxwell Opoku-Afari; the Second Deputy Governor, Mrs Elsie Addo Awadzi; the Managing Director of the Ghana Stock Exchange, Mr Ekow Afedzi, and the Board Chairman of Standard Chartered Bank, Dr Emmanuel Kumah.