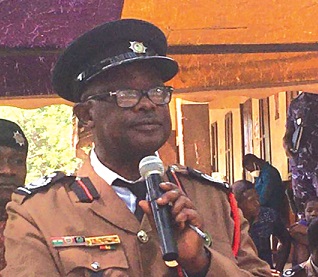 The Upper West Regional Command of the Ghana National Fire Service (GNFS) has trained 300 fire volunteers in its quest to be combat-ready during the forthcoming harmattan season.

At a passing-out ceremony to launch this year's regional bushfire prevention campaign at Issa in the Daffiama/Bussie/Issa (DBI) District last Tuesday, various items including Wellington boots, jackets and machetes donated by the German International Cooperation (GIZ) were presented to the trained fire volunteers.

"This constituted a 26 per cent reduction in the bushfire outbreaks due to intensified education and sensitisation," he said.

These bushfires, Mr Dodoo said, resulted in the loss of 363 acres of farmlands cultivated with foodstuffs at an estimated cost of GH¢619,646.32. He said although there was one death or casualty, 725 people, including women and children, were displaced.

Mr Dodoo said the training of the fire volunteers was, therefore, an attempt to combat such occurrences in the future.

He said 15 fatalities and 41 casualties were recorded in various fire incidents in 2021 as against one fatality and 26 casualties in 2020. These fire incidents included domestic cases, which topped the list with 98 cases, two industrial cases, 16 vehicular fires, 15 institutional fires, 31 electrical and 21 commercial fires.

Mr Dodoo regretted that none of the municipal and district assemblies had established the mandatory Anti-Bushfires Control Sub-committee as provided for under PNDC Law 229, Section (5).

The law states that "all Metropolitan/Municipal/District Assemblies shall institute bush fire control sub-committees which will regulate the burning of vegetation in MMDAs."

Mr Dodoo implored the fire volunteers to exhibit a high sense of professionalism in the discharge of their duties to prevent the degradation of the environment.

He cited practices that caused bushfire as charcoal burning, usage of naked fire in hunting, smoking activities, cooking on farms, deliberately setting up fires to grassland by herdsmen with the intention of getting greener grass for cattle to graze on.

He, therefore, asked farmers to notify the fire volunteers whenever they were about to engage in such activities on their land, to prevent the fire from getting out of hand.

He said anyone caught setting fire to the bush indiscriminately will be severely dealt with according to the law.

The District Chief Executive of DBI, Mr Nadi Imoro Sanda, appealed to stakeholders, including traditional authorities, to come together to brainstorm on how to address the menace to protect the environment for the present and future generations.

He cited the Nandom and Lawra municipalities where through the efforts of their traditional authorities they had experienced no bushfire for over a decade.