Farmers must adhere to advice on bird flu

The outbreak of the Highly Pathogenic Avian Influenza popularly known as the bird flu in 2021 has proven to have devastating consequences to poultry farmers in the country.

When it was reported in July, 2021 of an outbreak in the Greater Accra, Central and Volta regions, the hope was that it would be contained, but in no time, the Ashanti, Western North, Western, Upper West, Upper East, Eastern and Bono regions also confirmed the outbreak.

Surely, the bird flu outbreak is becoming one too many and each led to high mortality rates of birds, leading to loss of livelihood and investment and it behoves farmers to follow strict instructions from the veterinary service to stay in business and help sustain government’s determination for the country to become self-sufficient in meat production.

The first bird flu outbreak was reported in April, 2007 in a small–scale poultry farm at Kakasunanka, near Michel Camp in the Tema Metropolis.

This was followed by further outbreaks at New Dormaa of Sunyani in the Brong Ahafo region and Aflao in the Volta Region. 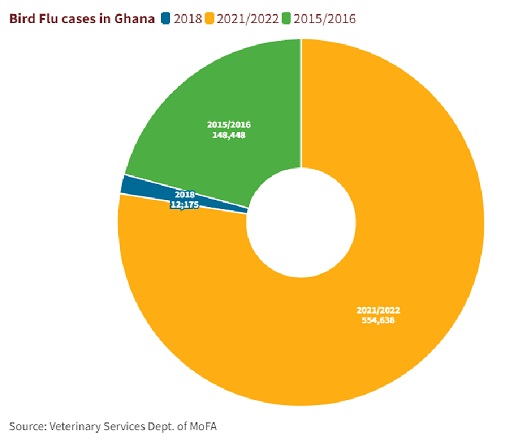 In June 2018, the outbreaks were reported at Boankra and Atia in the Ashanti region as well as Nkawkaw in the Eastern region affecting 12,175 birds.

In all the cases, hundreds of birds were destroyed and compensations were paid to the farmers, whose farms were affected.

It is in that context that the news came as a relief that government was voting about GH¢44 million as compensations to affected farmers out of which GH¢20.1 million has been released and was announced by the Minister of Food and Agriculture, Dr Owusu Afriyie Akoto last Wednesday.

The fund released is meant for stamping out, decontamination and disposal materials; payment of compensation to currently affected farmers and some outstanding compensation from 2015-2018 as well as a roll-out of a communication plan.

It is important that the farmers pay particular attention to guidelines and directives from the veterinary service directorate (VSD) on best practices such as the intensification of biosecurity measures on farms and also avoiding restocking of farms until biosecurity certification and management practices are certified by the VSD and the Animal Production Directorate.

Also, all poultry farmers must avail themselves for the ongoing biometric registration to enable the service to capture the comprehensive database of poultry farmers in the country.

The directorate is also advising dealers in the live bird markets to report any unusual death of birds to the veterinary services or to the nearest office of the Department of Agriculture.

According to the Head of Epidemiology of the VSD, Dr Fenteng Danso, other guidelines the farmers needed to observe were to control traffic between farms in the affected areas and between live bird markets and households as well as the need to improve on sanitation and proper disposal of dead birds and farm waste.

He said so far, infected birds had been humanely stamped out and disinfected, while a ban on movement in and out of the farms was put in place.

“Farmers are always encouraged to prevent the movement of vehicles between farms to prevent further spread of the disease.

“Farmers are alerted of the zoonotic nature of the disease and therefore, the farmhands are admonished to use personal protection when handling poultry birds,” Dr Danso told the Daily Graphic.

But speaking at a leadership forum in Dubai in the United Arab Emirates (UAE) at the ongoing Dubai Expo 2020, Dr Akoto hinted that Ghana spent $350 million importing poultry and poultry products annually and for the country to be self-sufficient, “we must reverse this trend.”

For that reversal to happen, the government undertook a pilot project on the production side and is currently waiting for the private sector for partnership.

Dr Akoto used an international platform to announce that the government was desperately looking for investors, both local and foreign, assuring the investors that the opportunities in the poultry sector were unprecedented.

The minister said, for instance, that even though the country was producing 65,415 MT of chicken, the demand for poultry in the country stood at 375,000 and, therefore, invited investors to set up large integrated poultry farms in the country.