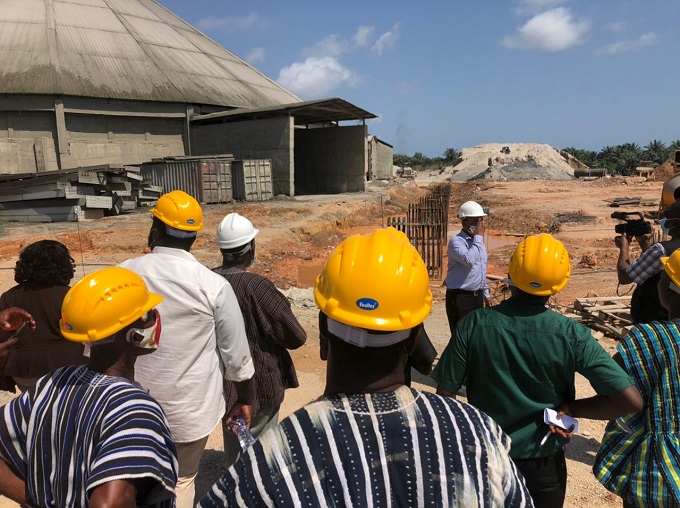 The dusty road leading to the operating site of Diamond Cement at Bokro in the Ahanta West Municipality of the Western region, has been approved for construction.

Clouds of dust that regularly emanate from the road has been the source of bitter complaints by members of the community and other businesses operating in the area for some time now.

The Western regional directorate of the Environmental Protection Agency (EPA), has said about 70 per cent of the dust was due to the road, contrary to previous fears by the community that it resulted from direct operations of the cement factory. The other 30 percent of the pollution may be attributed to other sources, according to the EPA, and that after the construction the situation will normalise.

This company said the construction of less than one kilometre road to the factory should not be too much of an undertaking, however it had been delayed owing to approval processes at the Urban Roads Department of the Roads and Highways Ministry.

Constructing the road
Speaking at a press conference, the Regional Director of the EPA, Mr. George Diawuoh said his outfit has been working with all stakeholders and that the approval for Diamond Cement to construct the road has been given.

The quest to construct the road was sent three years ago but the approval delayed until the Western regional minister intervened leading to the approval recently.
Constructing the truck terminal will ensure haulage trucks do not park by the road.

Industrial harmony
The Group Human Manager of Diamond Cement, Mrs Ellen A. Jonah said the company is conscious of the environment, health and safety of its host communities and other companies within the enclave.

The company, she said, remained committed to its policies and best operating practices tailored towards enhancing the competitiveness of a company while simultaneously advancing the economic and social conditions of its host communities.

She said the company would continue to operate as a good corporate citizen for the mutual benefit of all stakeholders as well as maintaining industrial harmony with neighbors.

“We have acknowledged the discomfort from the dusty branch road from the highway to the factory - we therefore seek permission for its construction and we are happy to say today that the road will be done in addition to the other facilities,” she said.

She expressed the hope that a committee formed to ensure that all stakeholders including representatives from the EPA, the Regional Coordinating Council (WRCC), the Municipal Health Directorate, the Paramount Chief of Lower Dixcove Nana Agyeman IX, the Municipal Assembly, and the companies operating in the area and the Western Diamond would ensure industrial harmony.

Mrs Jonah assured the stakeholders that Diamond cement remains a law-abiding firm and that the company works with all rules and regulations of the country. “We will not do anything that will negatively affect the health of the people”, she said and urged community members to draw the attention of the company to any issues bothering them for the necessary action to be taken.

Commendation
The Paramount Chief of Lower Dixcove, Nana Agyeman IX, commended the RCC for its intervention to ensure that the road is constructed to control the dust.

He said as a traditional ruler, he would always protect the interest of his people to ensure that right things are done together with the companies within the enclave.

He also commended the company for the provision of a classroom block and appealed for a clinic in addition to the government's proposed health facility under the Agenda 111 project.

The General Manager of the company, Mr Mohammed Majeed Khan, conducted the media round the facility, the new storage area for raw materials and reiterated that its operations does not emit dust.

He assured that after the road construction and the accompanying terminal, everything would be fine.