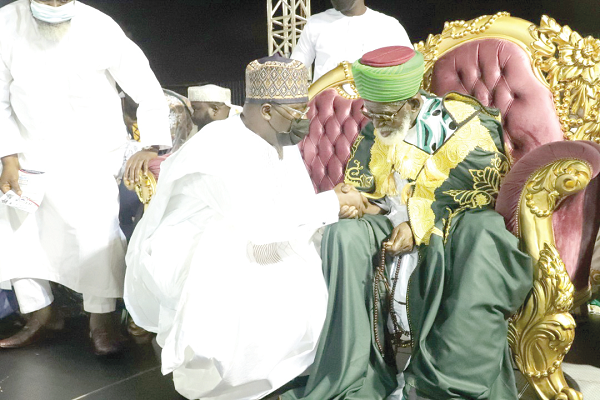 The Vice-President, Dr Mahamudu Bawumia, has encouraged Ghanaians to make tolerance their watchword to sustain the peace of the country.

He said peace could not be achieved without tolerance, stressing that it was the reason people needed to be tolerant of one another in order to smoothen the process of peace.

Dr Bawumia made the call when he addressed a gathering of Muslims at New Fadiman in Accra in the wee hours of Saturday to mark the birthday (Maulid) of Prophet Mohammed.

The event, which was marked with preaching and prayers, was on the theme; “Global peace, tolerance a collective responsibility for all”.

Dr Bawumia urged the faithful to use the occasion as a perfect time to reflect on the teachings, values and life of Prophet Mohammed and how they could continuously inculcate his noble values into “our lifestyles to make our communities, nation and world a peaceful place for all”.

“One of the fundamental principles of Islam is peace, and as adherents of the Islamic religion, we are supposed to be agents of peace wherever we find ourselves and in whichever situation.

“We often talk about peace and the need for all of us to be peaceful; we all know the essence of peace and what it means to our existence as a people,” he said

Dr Bawumia, who expressed delight that the celebration was back on the Islamic calendar after the 2020 edition was suspended due to the outbreak of Covid-19, said the theme reflected the true principles of Islam and certain remarkable attributes of Prophet Mohammed.

While sharing some inspiring stories of the Islamic Prophet, Dr Bawumia said Prophet Mohammed displayed much tolerance sometimes even at the risk of death.

He described the National Chief Imam, Sheik Osman Nuhu Sharubutu, as an iconic citizen of the country who continued to be an embodiment of peace and tolerance for the country and beyond, pointing out that “the life and values of our father continues to be a close reminder of the values of our beloved prophet”.

“Sheik Sharubutu has many remarkable values, but his tolerance is the most cherished which has contributed significantly to holding Muslims and the country together,” Dr Bawumia indicated, and cited the visit by Sheik Sharubutu to a church as a gesture that reinforced religious tolerance in the country.

The Vice-President further observed that the current religious tolerance in the country that had sustained the peace had been the collective effort of all, including Christian and Muslim clerics.

He described as remarkable the overtures many Christian leaders continued to extend to the National Chief Imam and other Islamic clerics across the country, adding: “maintaining the peace we are enjoying in our communities and in the country should be a concern and the responsibility of all regardless of religious or political affiliation”.

Since its establishment, he said, the fund had completed 134 projects — including classrooms, health facilities, bridges, drainage systems and libraries — in Zongo communities across the country, while it had built modern astro turf football fields in many Zongo communities for the youth.

“We have built 12 six-unit classroom blocks in many Zongo communities, while on the national front the government’s focus and investment in education is unparalleled in the Fourth Republic.

“The government of President Nana Akufo-Addo has prioritised and focused on education because we are well aware of what education does for our people. It enhances productivity, it is the greatest leveler and it is the only sustainable way we can transform our Zongo communities,” Dr Bawumia added.

According to the Vice-President, the government had also expanded access to education, as well as the application of scholarships, and made it difficult for any Ghanaian child anywhere from kindergarten to senior high school to be left behind.

Aside from that, he said, the special educational scholarship for brilliant needy students had ensured that 40 students from the Zongos were currently in their second year studying Medicine in Cuba.