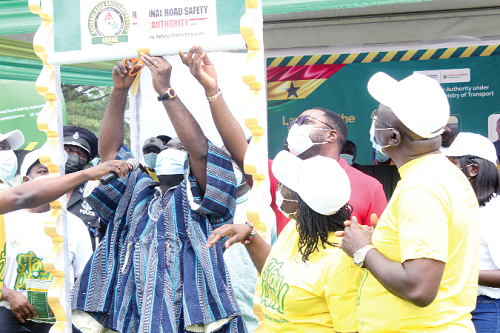 Mr Kwaku Ofori Asiamah, Minister of Transport, cutting a ribbon to launch the NRSA Stay Alive campaign in Accra. Looking on are some officials of the NRSA and other dignitaries. Picture: Patrick Dickson

The National Road Safety Authority (NRSA) has launched a national campaign to address the root causes of the increasing spate of road crashes, injuries and deaths (CIDs).

Dubbed: ‘Stay Alive’, the second multi-stakeholder initiative in two years will see the NRSA, the Driver and Vehicle Licensing Authority (DVLA) and the Motor Traffic and Transport Department (MTTD) of the Ghana Police Service jointly enforcing road traffic regulations and cracking down on indisciplined behaviours on the road to ensure compliance by all road users.

As part of the campaign, the NRSA will also collaborate with non-state actors, including the Prudence Foundation, the Didier Drogba Foundation of Africa, the Ghana Insurance Association (GIA) and 160 media outlets, including the Graphic Communications Group Ltd (GCGL), to sensitise road users to safety issues to induce positive behavioural change that will bring sanity to the roads.

The campaign was launched in Accra yesterday, with the various stakeholders renewing their commitment to go all out to tackle CIDs on the road head on.

The Minister of Transport, Mr Kwaku Ofori Asiamah, who cut the ribbon to launch the campaign, urged members of the public to rise up and be counted in the fight against the carnage on the road.

Present at the launch were the Deputy Minister of Transport, Mr Frederick Obeng Adom; the Director-General of the NRSA, Mrs May Obiri-Yeboah, officials from the MTTD and NRSA Board members.

The launch of the Stay Alive campaign, which is the second phase of the Arrive Alive campaign rolled out last year, is against the backdrop that human errors constitute 90 per cent of the factors leading to increasing road traffic crashes (RTCs), according to the NRSA and the MTTD.

Figures from the NRSA, as analysed by the Daily Graphic, show that 50,583 people had died in road crashes in the last 30 years from 308,183 reported crashes.

The statistics further show that 414,653 people suffered varying degrees of injury, with many of them becoming permanently disabled.

The NRSA figures for 2021 show that the number of people who perished in road crashes increased from 1,827 between January and September last year to 2,126 in the first nine months of this year.

Against this backdrop, the Stay Alive campaign will aim to influence members of the public to be advocates for road safety by taking active part in stopping irresponsible actions by other people that could result in road crashes.

The campaign thrives on catch phrases such as "Stop blaming the devil", and the tag line: "It's not the devil, it's you".

It also seeks to address laxity among policy makers and implementers by calling them to action.

Speaking at the launch, Mr Asiamah said the government had taken concrete steps to address the menace, going forward.

He said the committee set up by the government to unravel the causes of the increasing spate of accidents on the road had made a number of recommendations that were being implemented.

He also said the government had given approval to the war against indiscipline on the roads to ensure that road users acted in a responsible manner.

Mr Asiamah said efforts were being made to complete the automation of traffic management to reduce the human interface in traffic regulations enforcement.

"What is happening on our roads is not something of which we are proud. I appeal to the public, particularly the media, to support us to bring sanity to our roads and save lives," he said.

For her part, Mrs Obiri-Yeboah urged road users to be extra careful on the road, especially as the Christmas season approached.

"As we get closer to Christmas, we need to know that these are critical days as, they are accompanied by accidents. Let us all be ambassadors of road safety," she said.

She described road accidents as a public health crisis that required collective efforts to tackle.