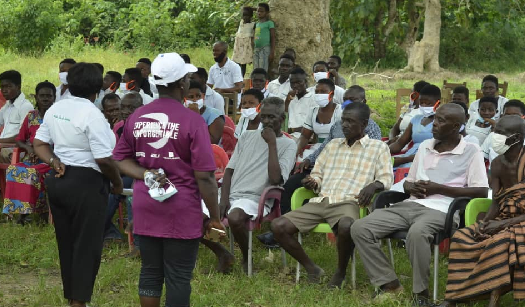 Mrs Elizabeth Adubofuor (left back to camera) engaging members of one of the communities during the outreach programme
30.5k Shares

The Network for Women’s Rights in Ghana (NETRIGHT) has revealed that women and girls in developing countries, including Ghana, are facing disproportionate hardships as a result of the COVID-19 pandemic.

NETRIGHT has consequently embarked on a campaign to raise awareness about the socio-economic impact of COVID-19 on women and girls.

The exercise, being done in partnership with the Window of Hope Foundation (WHF), a Kumasi-based non-governmental organisation (NGO), also assesses the kind of available interventions to contain the spread of the virus.

As part of the campaign, the Regional Focal Person for NETRIGHT and Executive Director of WHF, Mrs Elizabeth Adubofuor, embarked on an outreach programme in four communities in the Atwima Mponua District in the Ashanti Region to educate the people on the impact of the virus on women.

Mrs Adubofuor explained that the situation created by COVID-19 could affect the effort to close the gender inequality gap.

She said women and girls were bearing a disproportionate burden of the larger impact of the COVID-19 pandemic.

Mrs Adubofuor explained that with the advent of the pandemic, women's roles at home had increased and brought more pressure on them.

She cited unpaid care work for children who were now out of school, and heightened care needs for older persons as being among the load on women now.

She said caring for children, collecting firewood and fetching water, as was the case in some communities, increased the workload of women, and made it impossible for them to engage in meaningful economic ventures, thereby compounding their poverty levels.

“More women are into tourism, garment making, food processing, working in restaurants and selling of food items in schools, among others, all of which were being impacted by COVID-19,” she said.

She said even in a regular year, women were already working 1.5 times more hours a day than men were, caring for children, collecting water, preparing food, cleaning house, among others, and estimated that about 76 per cent of work done by women were unpaid care work.

She said studies suggested that most girls were getting pregnant because schools were not in session, and explained that “in some communities, pregnancy will become a permanent barrier to a girl returning to education even when the COVID-19 crisis ends”.

According to Mrs Adubofuor, during the current global health crisis, maternity and reproductive resources and facilities were likely to be redirected to counter the pandemic, posing additional threats to the health and safety of adolescent girls and young women.

With these issues in mind and the knowledge that girls were less likely to return to school after a prolonged absence, she said steps must be taken to avoid a disastrous reversal of the recent progress made in girls’ and women’s learnings.

“This is because girls’ education has proven to be one of the most cost-effective strategies to promote development and economic growth,” she said.

Among other remedies to the challenges being experienced, she encouraged males to engage in household activities and to participate in joint decision-making.

She said it was of critical importance that responses towards the prevention, containment, management and eradication of COVID-19 took into account gender equality and women’s empowerment to ensure that women and girls were not left behind.

She said much attention must be given to businesses that employed women and marginalised groups in order to reduce the impact on this segment of the population.

She said support should not only be targeted at large and medium-sized enterprises but also micro-enterprises and small businesses where women entrepreneurs were heavily represented.