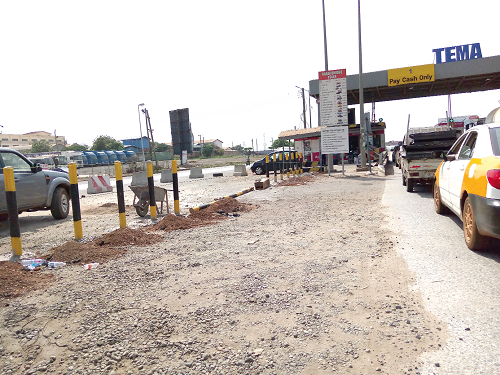 Work has begun to block the remaining illegal U-turns on the Accra-Tema Motorway to secure the safety of motorists and other road users.

This follows a Daily Graphic publication that in spite of the sealing off of the illegal bypasses and U-turns on the stretch, some motorists were not only forcing their way through but that some, especially tricycle riders, were still trying to create new ones to have easy access to their destinations.

That indiscipline is creating a menace on the country’s only true expressway, which is fast becoming prone to accidents and all manner of dangers.

When the Daily Graphic took a tour of the highway yesterday, men were at work to seal the U-turn near the tollbooth at the Tema end of the motorway.

The workers were seen erecting galvanised pipes to block entry at the tollbooth area, which in recent times has been used by motorists illegally, sometimes creating heavy congestion at the booth.

Policemen were at the scene to make sure drivers did not interfere with the ongoing work.

This is not the first time the unapproved U-turns on the motorway have been blocked; however, anytime such unapproved turns are blocked, motorists create new illegal turns

Last September, the Daily Graphic team observed that the GHA mounted new bollards to block all unapproved U-turns on the Accra-Tema Motorway.

Some of the areas the contractors worked were the U-turn near the tollbooth at the Accra section and from the Trasacco Valley stretch, through the block factory area and behind the East Legon Police Station all the way to the Accra Mall area at the Tetteh Quarshie Interchange.

Last week, a Daily Graphic team monitored activities on the motorway for about five hours and observed how some motorists were trying to access some illegal routes that had been sealed off.

The situation posed a danger to all road users, as the vehicles that used those illegal routes to easily join the motorway from any angle often got on to the road on the blind side of motorists.

Also, the stretch, which serves as a major international trade route to neighbouring countries, linking Ghana to Togo, Benin and Nigeria, was being used for other illegal activities, including the dumping of refuse and the indiscriminate siting of wooden and other structures.

Apart from the illegal U-turns, the team observed that trucks loaded with assorted goods parked along the shoulders of the busy highway, with the danger of being crashed into by approaching vehicles.

Many trucks were seen parked along the shoulders of both sides of the entire stretch of the motorway, either to get faults fixed or for the drivers to take a nap.

An officer of the National Road Safety Authority (NRSA), Mr Ransford Tetteh, who spoke with the Daily Graphic on the issue, said that those acts of indiscipline had contributed to most of the accidents recorded on the motorway.

“Speeding, wrongful overtaking, wrong parking, illegal U-turns, among others, are taking lives on the motorway frequently, although we have increased our surveillance efforts,” he said.