Chief Justice to close down courts in dilapidated structures 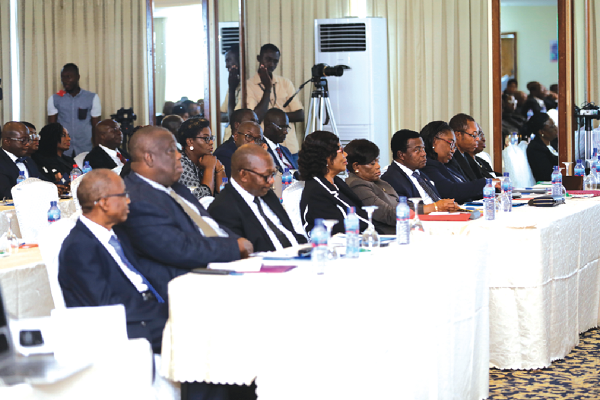 Some of the magistrates and judges in the conference Follow @Graphicgh

The Chief Justice (CJ), Ms Justice Sophia Akuffo has unveiled plans to close down all dilapidated court structures to ensure the safety and security of judges and court users.

She said most court structures across the country were deathtraps and demeaning to the administration of justice.

According to the CJ, she recently visited the Kumasi Metropolitan Assembly (KMA) Court where conditions were so deplorable.

“It is about time we showed as a nation, respect for justice,” she said.

She was speaking to members of the Association of Magistrates and Judges of Ghana (AMJG) at their 37th Annual General Meeting (AGM’s) in Accra last Wednesday.

This year’s two-day conference was on the theme: “Judiciary, A Bastian of Democracy,” and was attended by more than 100 judges and magistrates.

Turning to financing of the Judicial Service, Justice Akuffo urged the government to consult the Judiciary before allocating budget to it.

She said funds released to the Judiciary were not enough partly because it was not consulted at the planning stage.

She further stated that the 15 per cent allocated to the Judiciary from its internally generated funds (IGF) was not adequate.

Justice Akuffo said the Judiciary could be truly independent when it was allowed to have financial independence as enshrined in the 1992 Constitution.

She accordingly charged the magistrates and judges to explore new ways by which the Judiciary could be financed to guarantee its true independence.

Justice Akuffo noted that there was currently a backlog of cases, a situation which she said did not create a good image of the Judiciary in the eyes of the public.

She said backlog of cases leading to delays in justice delivery was unacceptable and for that reason “we are analysing to ensure all judges do make case management plans and abide by those plans.”

The CJ said a contract for the justice project under the e-governance programme had been signed.

The project, when rolled out, will track cases from the beginning to the end.

For instance, for criminal cases, the system would track from the arrest stage to the date of conviction or acquittal.

She said the programme would be rolled out to ensure that all people were treated fairly under the law.

Justice Akuffo also assured the gathering that all lower courts across the country would also be automated.

The Chief Justice said she had noted the problems facing the Judiciary and was poised to ensure that they were all resolved.
She said there were more than 200 vacant positions to be filled in the Judicial Service and explained that her outfit had to be given financial clearance before it could engage new hands.

The President of the AMJG, Mr Justice Victor Ofoe, touched on the problems facing his colleagues, including promotions that had been pending since 2013, poor security and inadequate infrastructure.

He also expressed worry over the delays in the payment of pensions to retired judges.

The AMJG honoured the former Chief Justice, Mrs Justice Georgina Theodora Wood, for her sterling leadership while in office.

She thanked the magistrates, judges and staff of the Judicial Service for their support while she was in office.