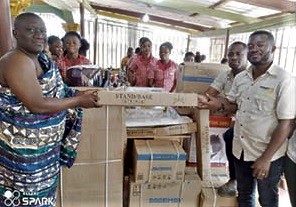 To promote Technical and Vocational Education and Training (TVET), as well as make the youth employable, the Chief of Akwasiso, Nana Kwakye Gyimah Yeboah II, has built a vocational centre for the community.

Although the multipurpose centre is equipped to train at least 100 females in various trades and save them from indulging in social vices, for a start, 41 females, mainly school dropouts and young mothers, have been enrolled to undergo training in hairdressing and dressmaking.

The facility at Akwasiso, a mining community in the Amansie South District of the Ashanti Region, is also to serve as a practical training centre for TVET students within the catchment area to build their capacities with employable skills.

Plans are also afoot to introduce some male-dominated programmes, including plumbering, to engage some male youth.

Subsequently, Asanko Gold, a mining firm, has lent a helping hand with the provision of industrial sewing machines, table-top sewing machines, hairdryers and accessories valued at hundreds of Ghana cedis.

Already, the company has built similar facilities at Manso Nkran and Bontefufuo in the Amansie South and West districts of the region respectively, which are training about 500 youth.

The PPP Unit Manager in charge of Stakeholder Engagement and External Relations of Asanko, Jerry John Dua, said the training of the youth was to make them competitive in getting employment in the mines.

He said the chief’s initiative tied into the vision and policy of the mine in reducing unemployment in its catchment areas.

Nana Yeboah II called for more collaboration between the mine and the communities to duplicate such facilities to save the youth from indulging in unacceptable behaviours.

He said 61 females initially applied to be trained but only 41 showed up to begin the first phase, and hoped the target of 100 trainees would be achieved in the coming years.