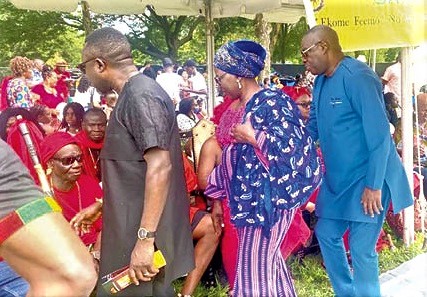 Hajia Alima Mahama (2nd from right), Ghana’s Ambassador to the US, and Dr Ibrahim Awal (right), Minister of Tourism, Arts and Culture, exchanging greetings with some of the participants at the event Follow @Graphicgh

The Minister of Tourism, Arts and Culture, Ibrahim Mohammed Awal, has urged Ghanaians resident in the US to champion the drive to promote tourism in the country.

He described the forts and castles, rich and diversified culture, including highlife music and ecotourism sites in Ghana, as some of the country’s unique assets and attractions which could be enhanced and marketed to the international community.

Dr Awal was speaking at this year’s GhanaFest in Chicago last Saturday.

The two-day festival, which was organised by the Ghana National Council (GNC) of Chicago, was aimed at celebrating and promoting Ghana’s cultural heritage through music, dance, food and clothing.

It was also to forge unity among the various Ghanaian ethnic groups in Chicago and the USA in general.

According to Dr Awal, the government had prioritised the development of tourism, arts and culture as tools for economic transformation and wealth creation.

He said tourists from the US accounted for over 60 per cent of all international arrivals in Ghana.

The minister mentioned some major tourist sites, such as the Kwame Nkrumah Memorial Park, which he said were being rehabilitated and modernised to make them more attractive.

He added that as Ghanaian citizens resident in the US, they must always strive for excellence and remain resolute in their support for the government’s efforts to build a strong and equitable socio-economic environment.

He also said it behoves all Ghanaians in the Diaspora to make deliberate efforts to visit home regularly to explore the numerous investment opportunities available and also establish businesses back home to create jobs.

The minister further entreated them to continue to live in peace and harmony.

Ghana’s Ambassador to the US, Hajia Alima Mahama, said the mission would soon engage the services of an Honorary Consul for Chicago to enhance consular services in that part of the US.

She commended Ghanaians in the US for being law abiding and urged them to continue to promote the interest of Ghana in their daily activities.

For his part, the Member of Parliament for Assin Central, Kennedy Agyapong, advised the people to take advantage of the numerous business opportunities in Ghana to help grow the economy for accelerated development.

He entreated entrepreneurs not to be deterred by the challenges associated with establishing new businesses, adding that perseverance was a vital ingredient in the success of any business enterprise.

The President of the GNC, Paa Kwasi Sam, said one of the successes chalked up by the council was free monthly healthcare services for its members and lauded the healthcare providers for their spirit of volunteerism.

He commended pioneers of the GhanaFest initiative, saying the festival, which began some 34 years ago, was the most outstanding African cultural exposition in the Diaspora.