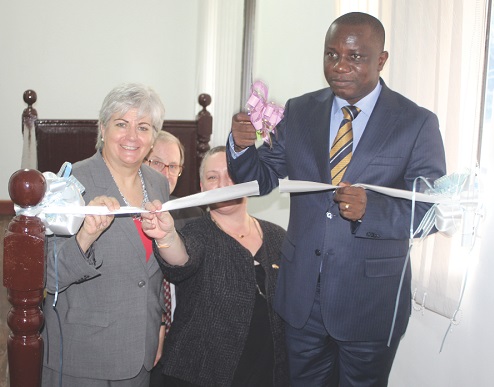 Mr Dominic Nitiwul (right), the Minister of Defence, being assisted by Ms Stephanie Sulivan (left), the US Ambassador to Ghana, and Ms Kirsten Madison (partly covered ), the Assistant Secretary of the US Department of State, to cut the tape to inaugurate the National Border Fusion Centre in Accra.
30.5k Shares

Ghana’s efforts to improve border security and tackle maritime crimes have been given a major boost with the inauguration of a Border Fusion Centre (BFC) in Accra.

The centre will be a one-stop shop where the security agencies will engage in multi-stakeholder approaches and share information to combat irregular migration, terrorism, piracy and other transnational crimes. 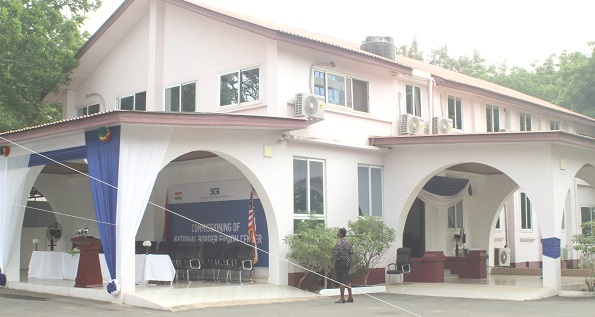 It will also help address gaps in Ghana’s security architecture and bring the security agencies, such as the Bureau of National Investigations (BNI), the Ghana Police Service, the Ghana Immigration Service (GIS) and the Narcotics Control Board (NACOB), under one roof to ensure coordination in their operations.

The BFC is part of the Security Governance Initiative (SGI), a partnership between the governments of Ghana and the United States (US), aimed at using inter-agency approaches to promote security in the country.

The US had provided Ghana with over $35 million under the SGI to strengthen its maritime and border security and improve the administration of justice, out of which $5.3 million was dedicated to border security alone.

Twenty-three analysts who are to manage the centre have been provided specialised training by the US.

At the launch of the centre in Accra last Tuesday, the Minister of Defence, Mr Dominic Nitiwul; the US Ambassador to Ghana, Ms Stephanie Sullivan, and the Assistant Secretary of the US State Department, Ms Kirsten Madison, cut a tape to open the facility for use.

Top officers from the various security agencies in the country were present at the ceremony.

Mr Nitiwul, who read a speech on behalf of the Minister of National Security, Mr Albert Kan Dapaah, said the inauguration of the centre would bolster the country’s security architecture and help deal with crime in its complex forms and promote maritime security.

“We are grateful to the US government for this beneficial partnership that has led to the setting up of this centre. We hope the partnership will blossom and bear more fruits for both countries,” he said.

The minister urged the security agencies to break away from their isolationism and act in a coordinated and integrated manner to manage crime in a comprehensive way.

He also asked the officers trained to manage the centre to be diligent in the discharge of their duties and avoid the tendency to see themselves as ‘tin gods’.

Mr Nitiwul said the draft bill on national border security had been finalised and would be put before Parliament for passage into law to enhance border management and maritime security.

For her part, Ms Madison described the inauguration of the BFC as an important milestone that would strengthen Ghana-US relations.

She said the launch of the BFC was particularly timely because complexities in crime across the world required state institutions to tackle it with borderless initiatives.

“Agencies must have a unified vision and strategy for securing national borders.

They must have joint protocols and procedures to leverage one another’s comparative advantages in terms of legal authorities, expertise and capabilities; and agencies must also have concrete mechanisms that enable them to share information and make sense of the bigger picture that can only be achieved by taking multiple perspectives into consideration,” she said.

Ms Madison highlighted a number of support areas in the US-Ghana partnership and gave an assurance that the US would support initiatives that sought to improve information sharing and coordination in the security sector.

“To demonstrate the US’s commitment to Ghana’s security, I am honoured to announce that we will be providing an additional $3 million in US foreign assistance funding to build upon the successes of our joint efforts to improve the capacity of law enforcement, promote the rule of law and the administration of justice and combat transnational financial crime,” she said.