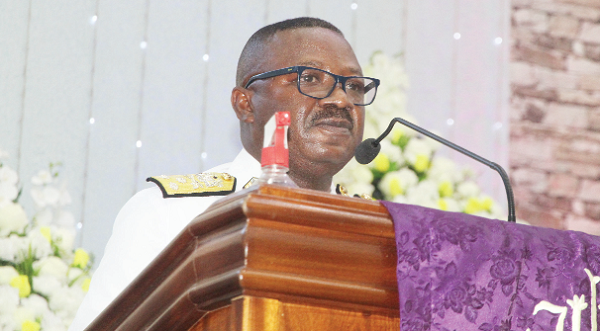 The Chief of the Defence Staff (CDS), Vice Admiral Seth Amoama, has charged the Ghana Armed Forces (GAF) to be extra vigilant at the country’s borders in order to contain any imminent security threat during the festive season and beyond.

That, according to him, would help safeguard the country’s territorial integrity.

“We need to be extra vigilant in providing the needed security to safeguard the country’s territorial integrity,” he said at the GAF’s Festival of Nine Lessons and Carols in Accra last Thursday.

He said in spite of the efforts made by the GAF to secure Ghana’s borders, there was the need to remain committed and vigilant to safeguard its territorial integrity.

The service was on the theme: “Behold, The Saviour Is Born”.

The event saw carols performances by the GAF, the Garrison Methodist-Presbyterian Church, Burma Camp, and the Accra Diocese of the Methodist Church Ghana, amidst dancing and showing of gratitude to God.

Vice Admiral Amoama explained that the emerging security threat from the Sahel region and in Ghana’s maritime space — The Gulf of Guinea — should be of great concern to the GAF.

He said the Military High Command, with support from the government, had put in place adequate measures, including training and the acquisition of equipment, to forestall any security breaches.

Highlighting some achievements chalked up by the GAF this year, the CDS said the military had been able to complete old projects and commenced new ones, including the provision of troop accommodation in garrisons.

On the international front, he noted that the GAF had been able to protect its integrity and professionalism among the global community in its various peacekeeping roles.

He charged the GAF to maintain a positive attitude in the discharge of their duties.

“Let’s continue our resolve to protect our integrity. I expect that we maintain our positive attitude to discharge our duties effectively and efficiently,” he added.

Vice Admiral Amoama expressed gratitude to the GAF for their dedicated service to the country, saying: “There can be no sustainable development without peace and security; therefore, we must take pride in our individual and collective roles towards the peace and security of our nation.”

He again expressed his appreciation to the Ghana Broadcasting Corporation (GBC) for collaborating with the GAF to broadcast the event live, saying it was a practical demonstration of civil-military collaboration.

The Director-General of GBC, Professor Amin Alhassan, for his part, explained that the essence of the celebration was to acknowledge and remember the birth of Jesus Christ and the peace of the nation.

He entreated the public to mark the period in peace and in goodwill towards one another.