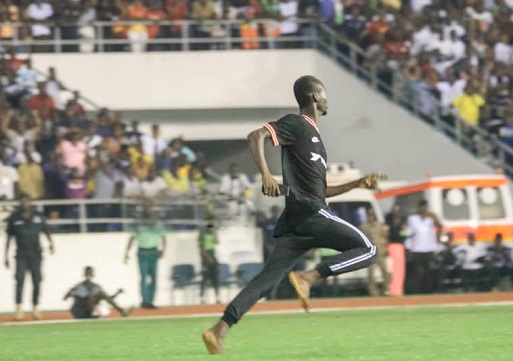 Mr Awal Suleman London as he invaded the pitch

A young man became the most popular on social media last Thursday when he defied all the odds and invaded the pitch during a football match between Ghana and South Africa.

Mr Awal Suleman London, as his Facebook identity goes, became the centre of social media discussions, particularly on facebook and instagram after he managed to outwit the entire security system at the Cape Coast Sports Stadium and invaded the pitch as the match was going on.

His courage and the manner with which he evaded the security personnel who chased him on the field of play to stop leading to some of the personnel stumbling and falling in the process is still trending.

Within an hour that the video, which is still trending, hit various social media platforms, it received the most hits.

Awal was not the only subject who trended in the video but also some of the security personnel, who, obviously unable to match Awal’s twist and turns, missed their steps and fell during the chase.

Many social media fanatics have, since the incident began, been digging for information about Awal, with some speculating that he may be working with the Ghana National Fire Service.

Even though Ghana beat its South African counterpart by two goals to nothing, the ‘chase’ on the field of play involving Awal and the security personnel got the greatest attention.

Awal, who is said to be a nursing student at the Nalerigu College of Nursing in the Northern Region, was eventually arrested and later released last Saturday.