Remains of enslaved African from Barbados buried at Assin Manso 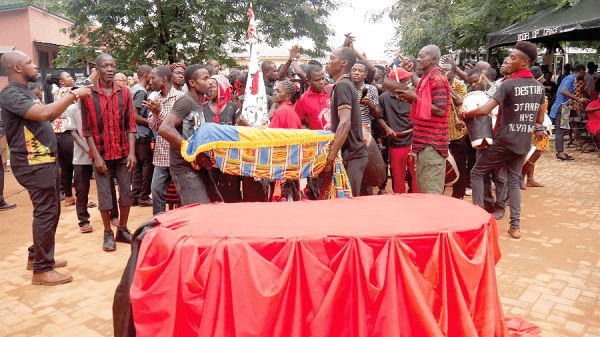 The Chiefs and people of Assin Manso in the Central Region last Thursday witnessed a solemn moment as they received the remains of an unknown enslaved African brought back from Barbados to bury at the Slave River site.

The remains, brought down by the Prime Minister of Barbados, Ms Mia Amor Mottley, and a government delegation, was received by the chief of Assin Manso, Nana Ohemeng Awere V, and some traditional leaders at the Assin Manso Ancestral Slaves River site.

Bringing down the body for burial formed part of Ms Mottley’s three-day visit to Ghana to be part of the ‘Year of Return’ campaign launched by President Nana Addo Dankwa Akufo-Addo to attract Africans in the diaspora to Ghana.

The Prime Minister and her entourage were accompanied by the Minister of Tourism, Arts and Culture, Mrs Barbara Oteng-Gyasi, and the Chief Executive Officer of the Ghana Tourism Authority (GTA), Mr Kwasi Agyeman.

The remains belong to an unknown African slave believed to have been sent to Barbados, through the Gold Coast during the slave trade, to be buried at the Slaves River site.

This gesture according to the Prime Minister was a symbolic return for all who had come to the Caribbean through the Gold Coast and could not return to their roots. The burial of the remains  at the site, one of the exit points for the slaves enroute to being shipped out of the country, was, thus, very significant.

On arrival at Assin Manso, Nana Awere V received the casket containing the remains, and libation was poured as custom demanded, before the interment.

The burial brings to three; the number of remains of enslaved Africans buried at the site, after Samuel Carson and Crystal from the United States of America (USA) and Jamaica respectively had been buried there. 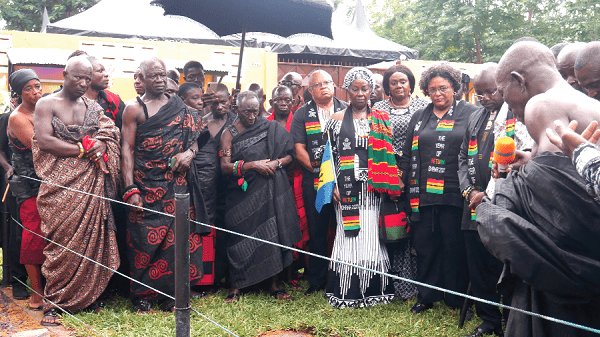 Nana Ohemeng Awere V, Chief of Assin Manso (3rd from left), and his elders look on as libation is poured to welcome Prime Minister Mia Amor Mottley (3rd from right) and her entourage

Addressing the durbar of chiefs, elders and the people of Assin Manso, Ms Mottley called for unity, as a disunited front would cause others to exploit and take advantage of the continent.

"Working separately and apart, working divided is what others wanted, to keep suppressing us, because it is the only means a few millions could overcome hundreds of millions of people but that is no longer our dream.

"Ours must be a collective journey to uphold the best collaborations and make life better for all our citizens, not some," the prime minister posited.

She also called on Africans and others of African descent to contribute to the building of a global civilisation and development of the African continent to ensure it realised the self-reliance status it yearned for.

Mrs Oteng-Gyasi, said the visit of the Barbados delegation was to foster bilateral relations in multiple sectors of the economy of the two countries.

“Their visit is to engage with our local investors and see how best they can bridge the gap between our brothers and sisters in the diaspora and those of us back home.

"The president,  Nana Addo Dankwa Akufo-Addo, has stated that the future is Africa, so we want all people of African descent across the world to join us back home, invest so we all enjoy the bright future of Africa," Mrs Oteng-Gyasi said.

“It has been 400 years since your forefathers departed from us, and it’s good we are seeing their off-spring again with your presence here. Now it is time to open a new page, to collaborate, corporate and introduce initiatives for the progress of these two countries so that Assin Manso would also benefit," he said.

The CEO of the GTA, Mr Agyeman, said the visit of the Barbados delegation was in line with the vision of the "Year of Return", and it was expected that the two countries would take advantage of the vast opportunities imbedded in their respective countries to make both sides better.

The Slave River site, otherwise known as the slave market, at Assin Manso is remembered as the destination point where slaves or captives who were captured from the northern part of the country and its sorrounding nations like Senegal,Nigeria, Burkina Faso  and others were made to walk over 700 kilometres to gather for auction and to be bought by slave masters.

It is also the site where the slaves, after taking their last bath, were branded, using hot metals on  their bodies to make an inscription to determine who their owners or masters were, before they were made to walk further miles away from the site to the various castles (Cape Coast and Elmina) to be finally transported to Europe or America.

Ms Mottley and her delegation toured the site sorrowfully, while reflecting on the toil and indignities their ancestors were made to go through.