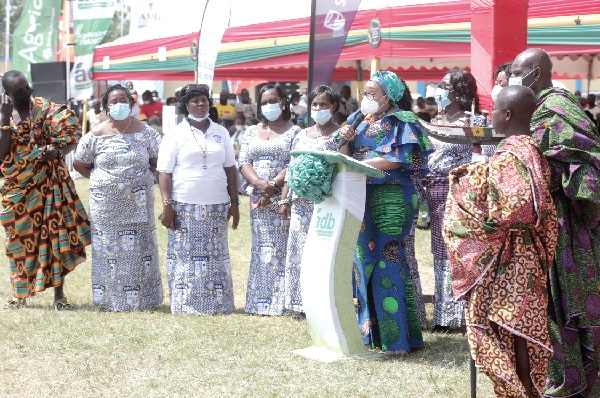 An annual Fisheries festival is to be organised in the country beginning next year to showcase the potential in the aquaculture sector, including all actors in the value chain.

The event, which will be the first of its kind, will be held to coincide with the World Fisheries Day which falls on November 21, every year.

The Minister of Fisheries and Aquaculture Development, Mrs Mavis Hawa Koomson, made this known at a grand durbar to climax the 37th National Farmers Day celebration in the Central regional capital, Cape Coast, yesterday.

The event, which was on the theme: "Planting for Food and Jobs: Consolidating Food Systems in Ghana", saw 165 farmers and fishers receive various prizes which consist of cash and farm inputs for their hard work in the year. (Refer to front page for other stories on Farmers Day.)

Mrs Koomson said the ministry had rolled out an initiative to support and sponsor individuals and groups with interest in aquaculture.

"We have supplied 24 youth groups, one college of education, four prisons including the Ankaful, with fingerlings to begin the initiative,” she said.

The minister also said about 10 ponds had been constructed at various places to help realise the goal, adding that "100 women would be trained in fish handling and processing to enhance their capacity".

She commended players in the fisheries sector for their immense role in ensuring food security, particularly the protein needs of the country.

On illegal fishing, the minister emphasised that her outfit would not tolerate the practice which she said was gradually destroying marine life, adding that “we will not tolerate any illegal fishing activity; perpetrators will duly be prosecuted when caught in the act”.

The minister further said that canoes without registration numbers would not benefit from the government's premix fuel intervention.

Mrs Koomson also announced that the country would be hosting the 7th Meeting of the Organisation of African, Caribbean and Pacific State Ministers in Charge of Fisheries and Aquaculture (OACPS) from April 5 to 8, 2022.

The Central Regional Minister, Mrs Justina Marigold Assan, said the theme for the celebration was in line with the government's effort towards attaining food security in the country.

She said the region depended on agriculture as its main economic activity as 60 per cent of the population were farmers.

According to the minister, the region had benefited from the construction of six warehouses while 237,471 farmers had also received support to shore up food production and improved on their living condition.

Mrs Assan, therefore, commended the farmers for their effort in feeding the country's ever growing population.

The President of the Central Regional House of Chiefs, Odeefour Amoakwa Boadu VIII, said the potential in agriculture was enormous and could provide job opportunities to the many unemployed youth in the country.