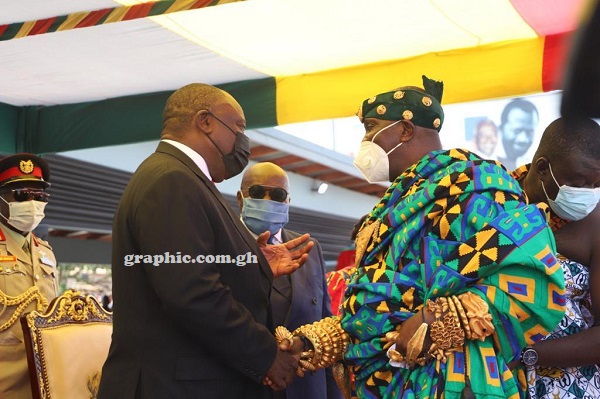 It was a display of a mixture of different Ghanaian cultures of drums and dance as Juaben re-enacted its traditional roots to climax a year-long celebration of 50 years of Nana Otuo Siriboe II as the Omanhene of Juaben Traditional area.

The reenactment covered every aspect of the lives of the people of Juaben connecting the spiritual and supernatural powers through music, dance and the serving of traditional palm wine to welcome guests.

But it was the entry of Asantehene, Otumfuo Osei Tutu II, to the Adu Boahene Memorial Park that brought everyone onto their feet with his immaculate performance.

Otumfuo sat in his palanquin heralded by a large crowd performing different functions as the Asante king displayed intermittent adowa dance to the admiration of the crowd.

From the paramount chief of Talensi, Tongraan Kugbilsong Nanlebegtang, through to the Volta region and even political actors thronged the venue to celebrate the man trained by the Kwame Nkrumah University of Science and Technology (KNUST) as an electrical engineer.

He worked briefly with the Electricity Company of Ghana at age 26.

Then known as Peter Amponsah but born Odehyee Yaw Boakye, the Omanhene took the oath of office on September 13, 1971, in front of his kinsmen in Juaben.

The Juabenhene, an entrepreneur and a philanthropist, expressed appreciation to President Nana Addo Dankwa Akufo-Addo for giving his golden jubilee celebration an international "flavour" by coming along with the President of South Africa, Cyril Ramaphosa.

He praised the President for giving his administration great support by providing basic infrastructure.

From the municipal assembly structure to the building of a new circuit court complex, the Juabenhene was overwhelmed by the support he has received from President Akufo-Addo.

The Juabenhene proposed to preserve some of the good cultures for posterity including hard work, respect and humility.

He expressed the hope that the next years of his rule should bring tremendous change to the people of Juaben.