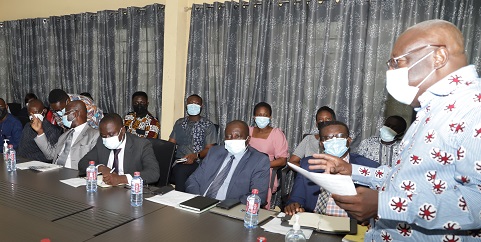 The Minister of Environment, Science, Technology and Innovation, Dr. Kwaku Afriyie, has called for an amendment of the law that establishes the Land Use and Spatial Planning Authority (LUPSA) to empower it to enforce proper spatial planning within protected ecological zones in cities and towns.

He said amending the Land Use and Spatial Act, 2016 (Act 925) would ensure that all permits for projects within greenbelts, wetlands and protected areas were ceded to the authority and not to the local assemblies.

That, he said, would give the authority “biting teeth” to sanction those who flouted regulated spatial planning activities and engaged in unregulated projects that removed green spaces within human settlements and threatened wetlands such as the Sakumono Ramsar site.

“I believe that this Ramsar site, which may even superintend several administrative domain boundaries, must be ceded to the authority under the law so that the local assemblies, which cannot control the chiefs, will stop giving building permits for people to build close to the site,” he said.

Addressing the management and staff of LUPSA at the authority’s national headquarters in Accra yesterday, Dr. Afriyie said spatial planning permits for areas close to ecological zones should be reserved for the authority, and not the local assemblies.

“As a minister, I do not like an authority being only in an advisory position and no teeth to bite. It is not correct. We have an international agreement on the Ramsar site, and that is why it should not be left to the local government.”

“As an authority, you are in a transition and you should make somebody who flouts the law on spatial planning a scapegoat,” the minister said.

The meeting afforded the minister and other top officials of the ministry, including the Chief Director of MESTI, Mrs. Cynthia Asare Bediako, the opportunity to interact with management and staff of the authority in order to acquaint themselves with its operations.

Per Act 925, LUPSA as a regulatory authority, only advises and recommends sanctions against those who flout regulations close to protected areas to the local assemblies.

As part of its mandate, the authority is to implement the provisions of the Act in support of a decentralised planning system and sustainable development of land and human settlements in Ghana.

He, however, lamented the lack of power to enforce the law on land use and spatial planning for the authority as a major challenge crippling its ability to enforce laws regarding protected areas at the national and local levels.

For instance, Mr. Yeboah said, there had been a High Court injunction to protect and preserve the greenbelt along East Legon as far back as 2009, but today, “everything is gone”.

“A whole High Court had ordered that we should demolish everything along the greenbelt there, but if you go there today everything is brick and mortar,” the CEO said.

“So, the majority of people who build houses along the whole of East Legon greenbelt stretch have no permit, and they do things with impunity because we do not enforce our laws,” Mr. Yeboah added.

According to him, a recent monitoring exercise carried out by the authority revealed that only 40 per cent of metropolitan, municipal and district assemblies were complying with the land use and spatial planning functions as prescribed by the law.