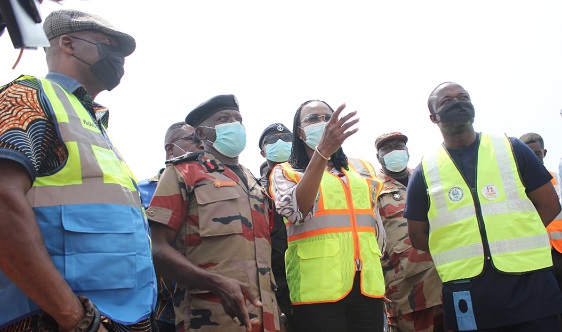 Ms Elizerbeth Sackey, Chief Executive of the AMA, explaining the dangers of living under high tension mast to the residents. Follow @Graphicgh

The Chief Executive of the Accra Metropolitan Assembly, Mrs Elizabeth Sackey, has ordered the relocation of residents living directly or close to high tension installations in the “Abuja Market” area in Accra following a fire outbreak which claimed two lives last Sunday.

During an inspection of the area together with the Chief Executive of the Korley Klottey Municipal Assembly, Mr Nii Adjei Tawiah and officers of the Ghana National Fire Service, Mrs Sackey urged the residents to move from the area, saying it was now a security designated zone, adding that the area posed a danger because of the high tension installations.

“We all agree that by the Constitution and policy of the Electricity Company of Ghana, it is not advisable to have any structure built under high tension installations and not even to sell around them because it is dangerous to your health, so I want to plead with all of you that we don’t want to see any structure being put up out here or activity ongoing until the investigations are over,” she said.

An individual, who identified himself as Superscary, pleaded with the government to support the residents after the investigations were over.

“We are pleading that after investigations, the government should help us. We are not staying here because we want to challenge the government, but it is because we don’t have anywhere to go,” he said.

He added that most of the residents were victims of a similar incident that happened years ago which forced them to move there.

“We keep moving from one place to another, and now we have been here for about seven years,” he lamented.

He also said as law abiding citizens who were present at the time of the incident, they would help the Fire Service with their investigations to ensure everything was successful. 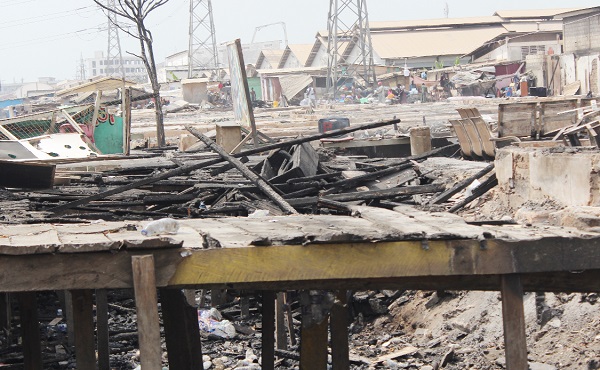 An aspect of the Abuja Market after the fire disaster. Pictures: ERNEST KODZI

Another trader in the neighbourhood, Mr Michael Moses, told the Daily Graphic that he understood the concerns of the AMA chief executive about the dangers posed by living close to a high tension installation but said they were challenged by alternative accommodation.

“I have a family; a wife and three children. If we leave, where will we sleep?” he asked.

According to residents who witnessed the incident, the fire started around 2:30 a.m. last Sunday as a result of an electrical fault, which escalated following a gas explosion.

They told the Daily Graphic that though the Fire Service got to the scene in time, it took about seven fire engines and an hour to successfully put out the fire.

Two people were later confirmed dead, one of them a Nigerian.