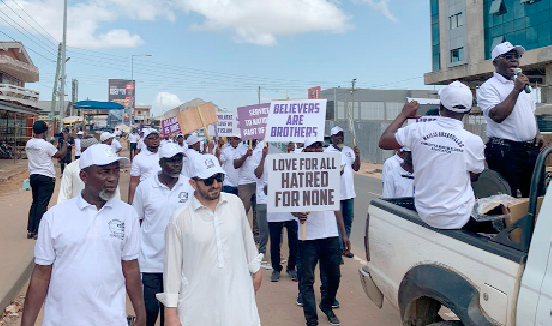 Members of the Ahmadiyya Elders Association on the preaching walk
30.5k Shares

The Elders Association of the Greater Accra Regional Ahmadiyya Muslim Mission has embarked on a health and preaching (Tabligh) walk.

The exercise was aimed at bringing the fundamental message of Islam to the public through the preaching of the word of Allah while gaining the benefits of physical exercise.

It was also to fulfil the Quranic instruction to Muslims to evangelise and call people to Allah, and served as an act of worship and also aimed at improving the health of the members of the association.

The association marched through some principal streets from Dansoman to the Kaneshie Police Station.

Aided by a public address system amidst singing of Islam songs, members displayed placards — including “Allah is one”, “Believers are Brothers”, “Love for all, hatred for none”, “Service to nation part of Islam”, and “The Messiah has come” — to sensitise the public about Islam, particularly the Ahmadiyya sect.


During the march, members of the association also distributed books and pamphlets about Ahmadiyya Muslim Mission and the teachings of Islam to members of the public.

The President of the association, Alhajj Adam Kofi Yamoah, said the current state of affairs in the world necessitated the exercise because people needed to know the importance of peace, saying that was what Islam stood for.

“When you look at the present situation of the world, you will realise there is turmoil everywhere, and so for that we need to go out there and let humanity understand that God brought us into this world to love one another and not to hate anybody,” he said.

Alhajj Yamoah added that the exercise was also to portray the true image of Islam Ahmadiyya, adding that it was a religious sect that loved and accepted everyone, irrespective of their background.

“We want to portray to the whole world that we love everybody, and that this is a religious organisation that everybody should try and associate with; we love everyone, and that is our motto,” he explained.

The Regional Missionary for the Greater Accra Ahmadiyya Muslim Mission, Sayed Naimat Ullah Taier, reiterated the importance of having peace as a nation.

He said the purposed of the exercise was to convey the message that peace was what the world needed.

“The world is going through a disaster, so we are conveying the message to everyone that Islam Ahmadiyya is the safety and the last hope of the world, and we promote peace for everyone,” he added.

The Elders Association under the Ahmadiyya Muslim Community is known as Majlis Ansarullah.

It comprises male members who are at least 40 years old.

The Greater Accra Majlis Ansarullah is made up of five circuits, namely Abossey Okai, Adenta-Madina, Nima, Darkuman and Achimota.